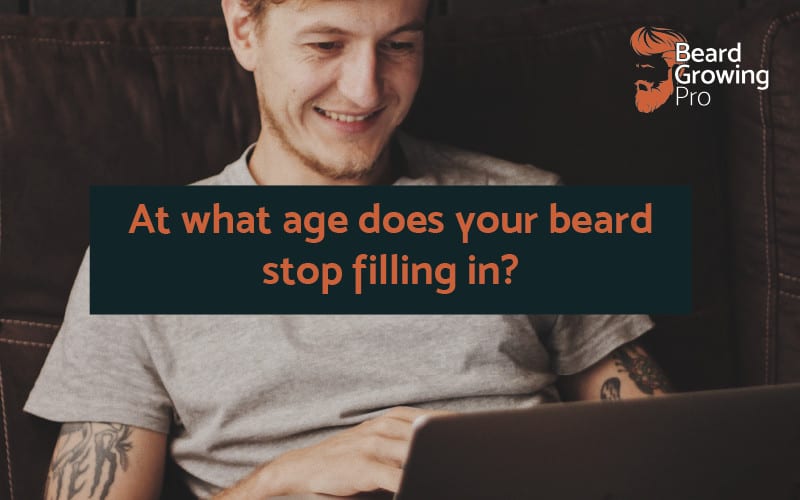 When you are growing a beard, it just seems like forever until it becomes a beard that you are happy with. If you are in the early stages of growing a beard, fear not – there are plenty of things you can do to help your beard grow strong and thick!

It is common for a beard to fill in between 20 and 25 years old. 32% of men reported this age on an online forum. However, a significant number of people saw their beards develop and fill in well into their 30s.

In this article, we will go over all of the things you need to know about beards and age. I have also researched online forums and gathered all of the ages at which people said their beards stopped filling in.

How long does it take for a beard to fill-in?

Even though there is a significant amount of science and data around when puberty starts, there isn’t much data on the other end of the beard-growing spectrum. We are limited to forum posts and answers from anonymous users of different websites to try to grasp a typical age at which a beard stops filling in.

I took a look at the most popular sites online where people freely share personal information. I looked at Reddit, capital, and Quora, where people as a very similar question.

I created a series of different age ranges and tallied the responses from the different websites.

The result of going through all of the forums and noting down at what age people said their beard stopped filling in.

Here are the main findings from my research on forums and polls:

You can see from the above table and graph that a significant number of people (about a quarter of the data collected) said that they had developed their beard completely before the age of 20.

You may be in the small percentage of people who have a continuation of filling in.

I asked my youtube audience of over 6000 people what age they thought their beards stopped filling in and this was their response:

The data collected from my YouTube audience is very similar to that reported by people in forums.

Does your beard fill in as you age?

It does not matter that they cannot grow a full beard for many beard growers.

If you lack some coverage on certain parts of your face, there are plenty of other options. You can select a beard style best supported by how your beard grows.

Every man can grow a beard – it just may not be the beard that they thought they would be able to grow.

If you want to find out more about my beard journey, check out my YouTube video discussing how my beard has changed as I have aged:

This experience is, of course, just my experience, and the data presented in the table above will give you a much better representation of the general population’s ability to grow a full beard.

I feel like many men agree that as you get older, your beard fills in. From my own experience, I know that my beard was not as full or thick until I was in my early 30s.

My beard-growing experience has been paralleled by what my relatives have been able to grow at certain ages. Therefore, I would consider the genetic component of beard growth one of the most important components.

Will a patchy beard fill-in?

If you are under the age of 25 and your beard is patchy, do not worry! There is plenty of time for your beard to develop and connect.

It is a common issue that has no one answer suitable for everyone. Not everyone can grow a full, evenly spread beard.

It is quite uncommon to have the perfect coverage of beard hairs. If you speak to any bearded person, they will tell you all of the issues they have had to overcome to grow their current beard.

A patchy beard is likely to fill in if you are under 30. If you have reached the age of 30 and your beard still has patches, you can’t do too much.

If you want to know more about growing out and dealing with your patchy beard, check out my YouTube video where I discussed the six insider tips for patchy beard success:

Here are some of the things you can do if your beard has not filled in and you are concerned about it:

Following the above advice will make sure that you can grow a beard that you are proud of – remember that this may not be the beard you thought you would be able to grow.

Part of this beard growing journey is to grow a beard by assessing the strong and weak points and choosing a beard style that matches that growth pattern.

Try not to be swept in by scam beard growing products to cover patches. They almost always do not work in the way they say they will.

Products that can help fill in a patchy beard

You might want to think about employing products to make your beard appear longer and fuller. Hair fibres are a popular alternative for those who do not want to take medication like minoxidil.

They are surprisingly affordable and effective – check out the price here.

Hair building fibres can be sprayed on the beard’s surface or shaken over it. Shaking the hair building fibres provides you more coverage over a larger area while using the applicator attachment allows you to apply it more precisely.

A puff of air delivers the hair fibres from the applicator to the hairs on your face.

These steps are how you use these fibres

Take a look at your family members who can or cannot grow a good beard. This easy observation will be one of the best indicators for you of whether or not you can grow a beard. And also, be a good comparison so you can understand at what age your beard is likely to fill in.

The genes required to grow a good, thick and lush beard come from both your maternal and paternal (mum and dad’s) gene pool.

So the most important question to ask yourself is if any of your relatives have a great beard.

The issue is that the inheritance of genes can get pretty complicated.

That is why siblings may sometimes have a different appearance despite having the same mother and father.

At what age does your beard stop getting thicker?

The human male has two types of hair covering their body.

Firstly, there is an ultrafine, un-pigmented short hair known as vellus hair. The other hair is thick, long, and pigmented, known as terminal hairs.

Testosterone can turn these fine hairs into dark and thick hairs as long as they are sensitive to the hormones produced by the body after puberty.

That is because your testosterone levels and the receptors at the hair base are what dictate how thick the beard gets. To understand how testosterone changes as we age, check out this table.

Here is a breakdown of the testosterone levels in men at different ages from this source.

If you want to know more about why beard hairs are so thick, you can check out my other article – why are beard hairs so thick – the answers from science – click here.

Do beards get darker with age?

One thing that may help your beard fill in is the darkness of the hairs that can increase the appearance of density.

Your beard colour is determined by the pigmented molecules produced in the hair follicle as the hair is made.

When you first start developing a beard, the hair will continue to get thicker as it changes from the light vellus hairs all over the human body to terminal hairs – the hairs that we are familiar with when we think of a beard.

There is no evidence to suggest that beards get darker with age beyond what happens at puberty. Although they can change colour due to the malfunctioning and age of pigment creating cells in the hair root.

It is quite normal for hair to change colour as you age, with the most likely option being that your hair will become lighter and grey from your mid-30s onwards.

What the science says about beard growth

A scientific study published in 1980 looked at the normal ages of pubertal events among American males and females.

The study looked at 36 males and 18 females examined at six-month intervals during five years.

Considering that this is the onset of beard growth in males, it is clear that there is plenty of opportunity in future years for your beard to become thicker and fuller.

These studies demonstrate a clear difference between the genetics of different nationalities, which could indicate why we see a significant difference in the production of a beard between people of different races.

There is no doubt that genetics plays a huge role in determining your beard growth and it is something that you cannot fight.

Your beard should continually fill in until about the age of 25. According to our research, some people have also said that their beard continues to fill in past the age of 30, but this is unlikely.

If you find that you have a patchy beard, there are plenty of things that you can do to make sure that your beard grows in an intentional looking way which, ultimately, will be the thing that makes it look better than a long beard that is struggling to achieve a good density.