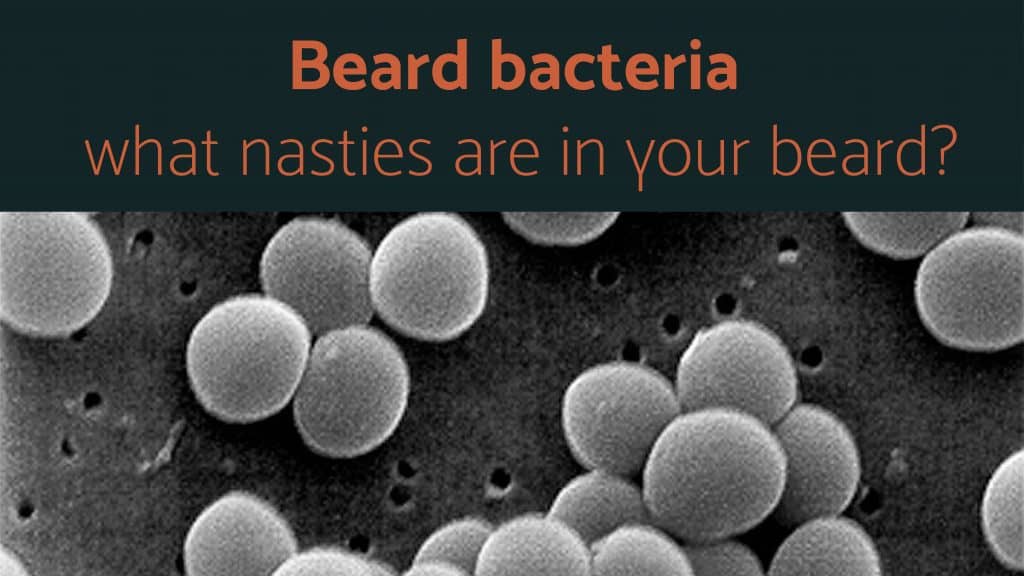 Beards have not been getting good press in the news! Whether it is poop, beard bacteria or other random bits of dirt, bearded men can’t get away from the fact that our beards are under attack. What is the truth to this bad press and how do you make sure that your beard is as clean as a whistle?

Beards can contain bacteria including Enterococcus faecalis and Staphylococcusaureus but there’s very little scientific evidence that your beard is full of bacteria or even hazardous at all! There’s even some evidence to suggest that your beard is cleaner than that of your clean-shaven co-worker!

Let’s take a look at the bad press that beards have been getting and bust some of the myths behind the sensationalized headlines.

Beard bacteria in the news

The first one combines two of my favorite topics – beards and dogs!

This first study was published in February 2019 in the journal European Radiology.

The researchers wanted to test to see if it was safe for humans to use the same MRI scanners as dogs. If dogs could use the scanners without any health implications it would help with ensuring that the dogs had the best level of care and were able to be diagnosed quicker.

The research wasn’t meant to be a fur vs. hair argument but that is what the headlines were reporting on.

The study used 18 male volunteers and found that all 18 exhibited “high microbial counts” on their skin and saliva. When compared to their doggie equivalents, 23 of the 30 dogs showed that level of germ contamination.

The story doesn’t end there – it even gets a little worse!

Seven of the men tested positive for microbes which make people really sick under certain circumstances. Four of the dogs also had this microbe but that’s significantly less than the seven men with the gross bacteria!

The most disgusting microbe was Enterococcus faecalis. This is a common gut bacteria responsible for urinary tract infections and other health issues.

What does this mean for you and your beard?

The study that first highlighted this increased level of gross bacteria in beards used a very small sample size. This means that the study really can’t say for sure that bearded men are germier than the average person.

They even said themselves “there is no reason to believe that women may harbor less bacteriological load than bearded men.”

The next study that is widely published has a much larger sample size of people…but does this mean your beard is filthy?

The journal of Hospital Infection – beards vs clean shaven

Another study, completed in 2014, was published in the Journal of Hospital Infection.

This study had a much larger sample of human faces and focussed on men who work in healthcare. The researchers were looking at men that had beards and another lot that were clean-shaven. They took swaps from their faces and looked at the number of bacteria on the face.

Clearly, for healthcare workers, you want to have as clean an environment as possible and make sure that you don;lt infect any patients.

The scientists found that:

Ah, there you have it. You don’t need to worry – your beard probably doesn’t contain a load of bacteria that aren’t found on other people. It’s only when this bacteria enters the bloodstream or body through some other means that you really have to worry.

This probably won’t be the last you see of news headlines or bad press about beards. Be prepared for more articles or studies but here is how you can tell if it is good science or not:

Using these simple checks and balances can help you work out if the science is credible or not.

How to keep your beard clean

Cleaning your beard regularly and properly isn’t rocket science but can mean the difference between a clean well-nourished beard or a clean dry beard.

Here I want to talk you through the process of how to clean your beard AND make it conditioned so you can have confidence!

Daily washing is not something you should do unless you have a particularly dirty job or a daily routine that involves you getting dirty!

How often to shampoo a beard?

Over shampooing a beard is one of the worst ways to dry out your beard! Overwashing can strip your beard of natural oils and cause your beard to become dry and wispy.

I recommend a maximum of three times a week but for most people one to two times a week is all you need to do.

Make sure that you use a beard shampoo! Hair shampoo is a little harsher and can quickly dry out your beard. If you find that your beard is still a little dry a beard conditioner is something you should consider using.

After washing there is a little bit of care needed to keep the hair conditioned and the skin underneath moisturized.

There we have it, my friends! Your beard is not as dirty as the media will have you think. It’s easy to keep your beard clean and you can easily maintain a nice beard routine!