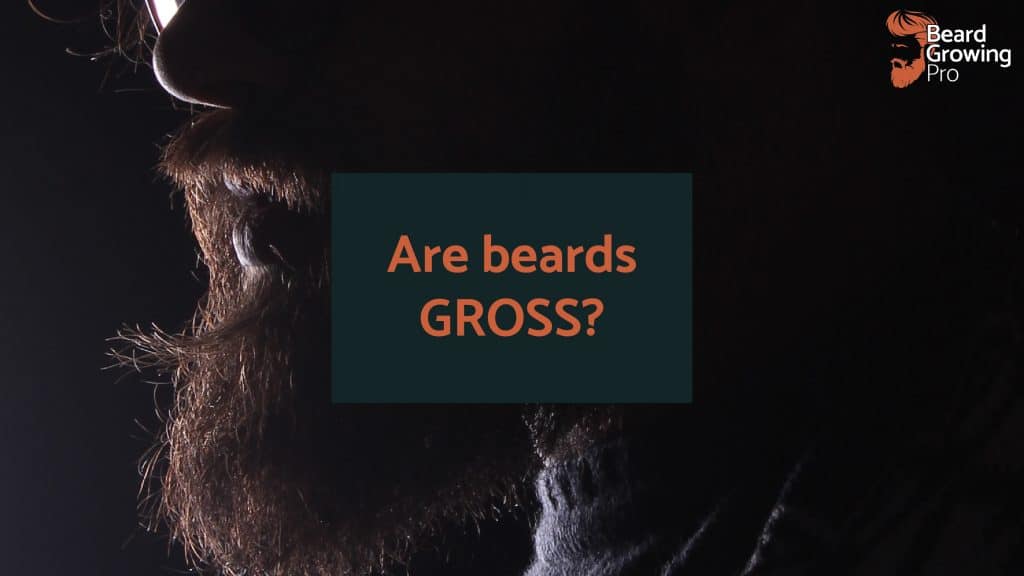 Are beards gross? That is the question that pop’s into the heads of men who are thinking of growing a beard and women who want to know if their intimate partner is walking around with a bacteria harvesting fuzz on their face…But what do we mean when we say something is gross? Is it attractiveness? Is it that we imagine that they have some level of dirt and bacteria in them? In this article, we look at the reasons why beards may or may not be described as gross!

When we look at the science, it is clear that women find someone with a beard more mature, masculine, socially dominant and aggressive. Science shows us that beards can harbor more bacteria than a dogs fur and a toilet seat so maybe they can be gross sometimes.

According to Statista, in a 2017 survey, 33 percent of respondents reported that they always have a beard. That’s a load of men sporting facial hair. But are these men and their beards gross?

What do we mean when we say something is gross? Here is the definition of gross from the free dictionary.

Brutishly coarse, as in behavior; crude: “It is futile to expect a hungry and squalid population to be anything but violent and gross”(Thomas H. Huxley).

b. Disgusting or offensive: Don’t you think slugs are gross? He told a gross joke.

Whether they are “disgusting or offensive” is probably what people mean when they are talking about beards. So, do they think they are offensive?

Here are the pools from around the web where people have expressed their opinions of beards – I guess we are talking more about whether people find them offensive with these sorts of studies.

People’s opinions of beards – do people think they are gross?

Over the years, beards have come in and out of ‘fashion’ but there are always a number of men to which fashion does not matter.

The thing is, a load of people will always have an opinion on whether beards are gross or not. There have been a number of polls and surveys over the years but they often contradict one another.

Here are a few polls where beards have been at the center of the discussion:

It seems to me that most people when polled say that they prefer clean-shaven men. However, when you look at the research it seems to be the opposite. I sit that we should believe a random poll or science? As a bearded man and scientist, I say I trust the science!

In research published by the Journal of Evolutionary Biology titled “the masculinity paradox: facial masculinity and beardedness interact to determine women’s ratings of men’s facial attractiveness”, researchers asked 8,500 women to evaluate the attractiveness of men of three categories – bearded, fully bearded or sporting a goatee.

They used photos of men as they grew their beards. The results showed that men who were sporting full beards were seen as more mature, masculine, socially dominant and aggressive.

Beards were also a trait that women would consider when choosing a short or long term partner.

Studies that show how dirty/disgusting beards are:

A 2019 study that wanted to determine whether it would be hygienic to evaluate dogs and humans in the same MRI compared the bacteria in men’s beards to that found on a dog.

Specimens were taken from 18 men and 30 dogs and also compared the extent of bacterial contamination of an MRI scanner shared by dogs and humans with two other MRI scanners used exclusively by humans.

The study showed a significantly higher bacterial load in specimens taken from men’s beards compared with dogs’ fur. The authors of the study concluded that bearded men harbor significantly higher burden of microbes and more human-pathogenic strains than dogs. As the MRI scanner used for both dogs and humans was routinely cleaned after animal scanning, there was a substantially lower bacterial load compared with scanners used exclusively for humans.

Beards dirtier than a toilet seat?

Microbiologists in Albuquerque, N.M. recently found that men’s facial hair can contain as much bacteria as your average toilet seat, according to Action 7 News. John Golobic, a microbiologist with Quest Diagnostics, swabbed a group of bearded men and analyzed the results to see how dirty the beards were. Golobic said that some of the men’s facial hair contained bacteria that you would commonly find in a toilet.

But beards aren’t the only thing found to be as dirty as a public restroom. Here are other items found to be dirtier than a toilet seat. So maybe we can’t take all of this data too seriously – unless we accept that everything is gross and should be compared to the cleanliness of a toilet seat!

ATMs: As dirty as a toilet seat. (Time Magazine).

Toothbrushes: Absorbs all sorts of nasty bacteria looming in your bathroom. (Men’s Health)

For a full rundown on this subject check out my detailed blog post all about beard bacteria – click here.

The most disgusting microbe was Enterococcus faecalis. This is a common gut bacteria responsible for urinary tract infections and other health issues.

How to clean your beard so it is not gross

Here is how clean and maintain my beard. For a full rundown on what you should be doing. check out my other blog post “How to grow a beard – the ultimate guide!” – click here.

I wash my beard with beard shampoo and conditioner every other day but always get it wet during my daily morning shower. I then blowdry the beard to how I want it to sit and use beard oil and wax sparingly until I get the shape to stay in. By using the boar’s hair brush lightly on the surface of my beard I have found that it helps control hairs that otherwise fly away from my face.

I use scissors to remove any single, stray hairs that are causing me an issue. I do not use trimmers on a daily basis. In the past, I have had a tendency to over prune if I use trimmer daily. I shave the neckline with the safety razor and check to see if the cheek line needs the same treatment.

Weekly I take my small beard trimmers and remove any obviously overgrown hairs and shape up my sideburns.

I also cut the hair on my head on the weekends so I ensure that there is a nice fade going into my beard.

Monthly is when I take a bit of time on a Saturday or Sunday to make sure that my beard is trimmed to how I want it. Every month I do a harder trim under my chin and shape up anything that throws off the line of my beard.

I have a full guide available on what I do with photos – click here.

What really matters – your opinion of your beard

What really matters at the end of the day is that you take good care of your beard and that YOU enjoy and like it. Obviously there is a load of factors that go into deciding whether anything is “gross”.

Top tips are to wash your beard and make sure that your partner and the one that matter most to you are not offended by your beard. Only then can you really claim that your beard is 100% not GROSS!