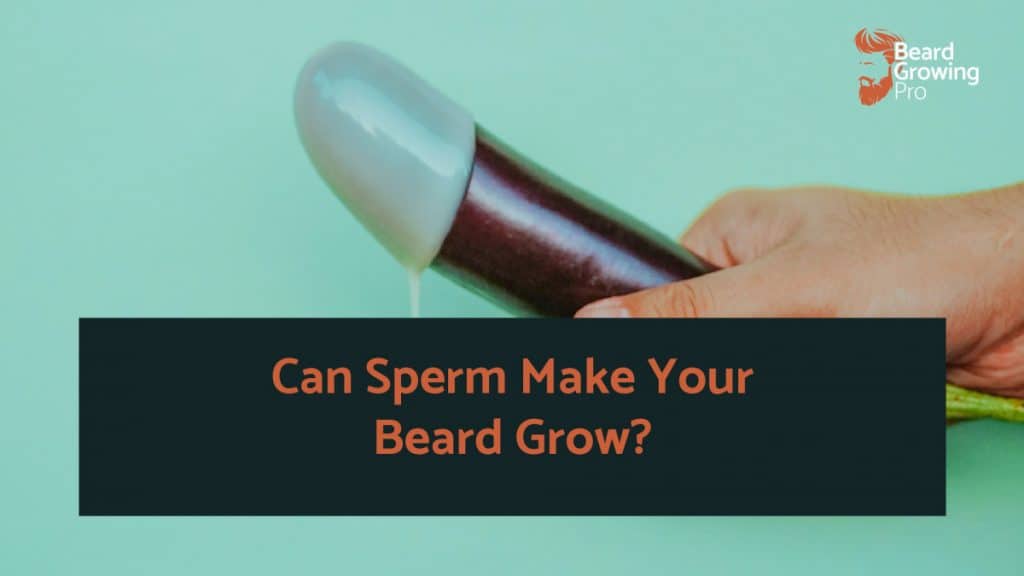 There are certainly plenty of rumours around growing a beard. One of the biggest rumours is that sperm – and semen – can make your beard grow. It seems like a natural and common sense understanding that semen would contain manly chemicals and components for boosting beard growth. However, there is very little evidence in the scientific literature to support this urban myth.

There is very limited evidence that spermidine (a component of semen) can help elongate hairs when applied to hair follicle cells and when consumed orally. However, the amount of spermidine in semen is very low, and there are better sources in common food groups.

Semen is an organic fluid that is secreted by the sexual glands and other sexual organs of males. It contains sperm, the male reproductive cell responsible for fertilising female egg cells and creating a baby.

Human semen contains several components and elements to promote the survival of the sperm. It contains enzymes, fructose and water, allowing the sperm to swim whilst providing energy.

The composition of sperm is complicated since the semen is made up of components from four glands. Each of these contributes a different amount of material to the sperm and semen.

What is in Semen?

During ejaculation, sperm passes through the ejaculatory darks and mixes with fluids from the prostate, seminal vesicles and bulbourethral glands to form the semen. Each is responsible for a different part of the semen.

Sperm has a pH of 7.35 – 7.5, which makes it pretty much a neutral pH. This pH means that applying it to hair is unlikely to cause any damage to the beard hair through acidic or basic corrosion.

The reason semen started to become a popular, topical treatment for beard growth and other health benefits such as acne, skincare, facial products was because of a molecule called spermidine.

Spermidine is a polyamine compound that was originally isolated from semen. Although it has been isolated initially from sperm, it is found in various food sources such as aged cheese, mushrooms, soy products, legumes, corn, and whole grains.

A study published in 2011 looked at the application of spermidine for promoting human hair growth.

Because rapidly regenerating tissues need a lot of poly a mean synthesis, they hypothesised that polyamines might be important for normal hair growth since the hair follicle never sleeps in its growth phase and is constantly pumping out hair.

The researchers looked at the effects of applying spermidine to human scalp hair follicles and human hair follicle stem cells. It was found that under the study conditions, the spermidine promoted hair shaft elongation and kept the hair in the growth phase (anagen phase) for longer.

This study is only one study, and much more needs to be done before we can completely be sure that spermidine is an important part of hair growth and that application to beards will promote growth.

We still do not have any evidence that topical application of spermidine to beards can promote growth.

Spermidine in your diet

The researchers used 100 healthy males and females, and they were randomised to receive a tablet containing a spermidine base nutritional supplement or a placebo once a day for 90 days. At the beginning and the end of the treatment, one hundred hair follicles were plucked and looked at using a microscope to determine the number of hair follicles in the growth phase.

It was found that the spermidine based nutritional supplement increased the number of hair follicles in the growth phase after three months of treatment. All of the results were also significantly better when compared to the placebo group.

They did not specifically look at the effect of spermidine in beard growth, but the effect is likely to be similar for beard hairs that have been stimulated to grow with DHT.

It is unlikely that spermidine will promote the evolution of beard hairs from vellus hairs to terminal hairs because the compound is very different to any hormones that could stimulate the androgen receptors at the base of the hair follicles.

You can see that if you wanted more spermidine in your diet, you’d be much better off eating these tasty foods rather than consuming many litres of seminal plasma.

Besides spermidine, there are plenty of other components in semen that may play a role in contributing to beard growth.

Below, I have taken all of the major constituents of semen and looked at the prevalence of any literature on its effect on hair growth, testosterone, or DHT.

In all of the seminal fluid constituents, there is no evidence that any of the components can affect beard growth in any way. Some of the components have been known to with testosterone production and sebum production, but there are far better sources for your beard growing journey than semen and sperm.

What parts are (potentially) good for beard growth?

We can see from the above table that there are some potentially beneficial components of sperm and semen. The problem is that they are available in very low quantities, which means that there are much better sources of beneficial molecules such as vitamin C and zinc from foodstuffs.

There is very limited evidence of spermidine being a beneficial molecule for beards and hair growth. It seems to keep hairs in the growth phase for much longer but, there is not much available in semen, and you’d be much better off consuming a lot of healthy legumes and mushrooms and aged cheese to get the required amount into your system.

Dangers of putting semen on your beard

Even though semen is a naturally produced material, some issues may arise if you put it in your beard or consume too much of it.

The first is disease transmission. Semen can transmit infections by passing through mucus membranes found in the lips, nostrils, and eyes.

If you get it into your eye, you are also potentially at risk of ocular herpes, which can cause inflammation and even vision loss.

Chlamydia conjunctivitis is also a real issue. It is less severe, but it has a burning sensation and redness and discharges from the eye.

In this article, we have been through everything you need to know about semen and beard growth. Despite what some blogs and YouTubers may say, there is no evidence to support the assertion that semen can help beard growth or even condition beard hair.

There have been limited studies into spermidine as a topical treatment and a dietary supplement, but the quantities found in semen is too low to have a significant effect. To get a good effect from spermidine, you have to consume lab-made spermidine or get it from food items such as mushrooms and legumes.

It is best not to put any semen in your beard for beard growth as there is no evidence to support any of the components boost beard growth.