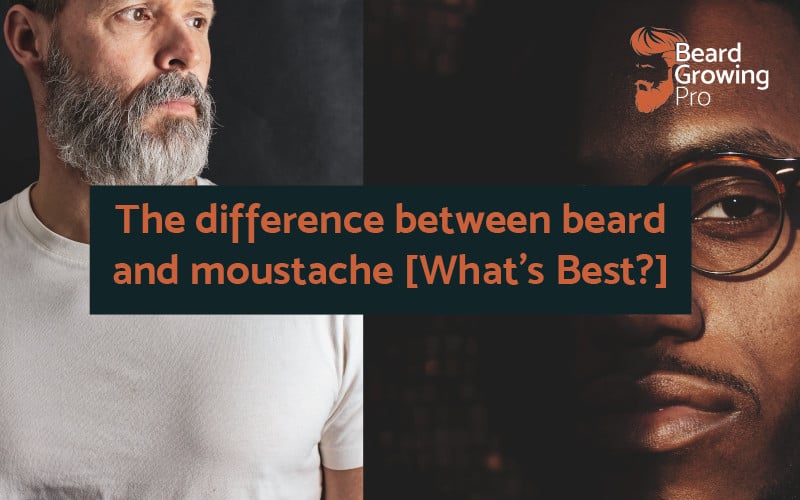 By the end of this article, I am confident that you will be able to decide whether or not a beard or a moustache is better for you.

Just so that we are on the same page, we need to make sure that we both understand the physical difference between a beard and a moustache.

Here is a succinct definition of the difference based on where the hair grows on the face.

Many moustaches and beards that can complement nearly any growth pattern or face shape.

Depending on your growth stage, you may wish to start with a moustache as it is an area of the beard that people can grow much easier and at a younger age.

The benefits of a moustache

For teenage boys and people early in their beard growth journey, the moustache is an area of the face that grows hair first.

Because a moustache develops first, most people develop a moustache before they are comfortable with how their beard looks. When I was younger, the moustache area was one of the first to develop fully.

Growing it younger and growing it quickly will mean that it is a great option for many people.

Here are the benefits of growing a moustache rather than a beard.

One great thing about a moustache is that you don’t need to wait for the rest of your beard to grow evenly before growing one.

Most people can grow a reasonably dense and full moustache well before a dense beard.

There’s nothing stopping teenagers from growing a moustache.

Even if you are an older person whose beard does not fully connect or has a significant number of patches, you will be able to grow some form of moustache that will appease even the pickiest of facial hair enthusiasts.

Beardstaches are becoming very popular because you can quickly grow a thick and full moustache and change your style with a meaty and dense moustache compared to a beard.

Fewer products and tools to maintain

Growing a moustache also requires a significant amount less product than a beard.

The tools you need can be as simple as a comb and a sharp pair of barber scissors to maintain a moustache.

There is no need for timmers, natural hair brushes, or a wide variety of balms and oils.

With a moustache, you only really need to purchase the following equipment for everything from a stubblestach to a full fancy moustache.

It can be grown quickly

One thing I love about growing a moustache is that it can be grown incredibly quickly.

Because of the high-density growth above the lip, the moustache looks much fuller and thicker than other parts of the beard when it is grown out.

A moustache can look full and thick in as quick as two weeks because the hairs can grow long enough to cover the gaps in the moustache very quickly. Many more moustache styles are considered final styles with a shorter length.

Many beards require a lot of maturation time to look thick and full.

Grow at a younger age

This age is much earlier than when many of them said that their beards started to grow:

When you are young, you can play about with your facial hair much easier than if you have decided to follow a career into a particular corporate and Conservative path.

The young age at which you can grow a moustache is a great bonus for those teenagers who are impatient and do not want to wait for their beards to grow.

Easier to trim up at home

I love having a moustache because it is very easy to trim up at home.

You do not need any special skills, and even the most nervous DIY barbers can build confidence in trimming up their moustache.

The great thing is that if you make a mistake, it grows out quickly so that the mistake is hidden after only one week of growth.

Not as hot in the summer

I have had a full beard for approximately two years, and even though I do not find much of a difference between my beard in summer and winter, some people do not like the extra heat associated with a beard.

I live in Australia, and the summer temperatures can get up to 45°C.

Having a moustache only means that you can easily escape the heat by splashing cold water on your face or get the full refreshing effect of taking a dip in the ocean without having a beard in the way.

If you live in a hot climate, maybe a moustache will better suit your temperature tolerance.

A huge array of styles

Moustaches come in a huge variety of styles. There is an option for everyone from the lightest of stubble moustaches to the thickest and fullest walrus moustaches you can imagine.

Some people cannot grow as much hair density on their upper lip as they wish.

If you aim for a full walrus moustache, you can enjoy the full journey, as even the thinnest moustache densities can look impressive. That is because moustaches rely on the contrast between the skin around the moustache and growth on the upper lip.

Keeping your stubble down to the skin around the moustache will make it look beefier quicker.

Doesn’t dry out as easily

A moustache rarely gets long enough to dry out.

Because a moustache is generally much shorter than a beard, the hair is less likely to dry out due to the ability of sebum to coat the hair fully.

Super long beards struggle to maintain moisture and condition at the ends of the beard because they are many inches away from the skin’s surface – where the sebum is produced.

The benefits of a beard

There are many benefits of growing out a full beard over a moustache.

I talk about some of the weirder benefits of growing a beard in my YouTube video below.

A moustache isn’t for everyone, and I have noticed that a beard seemed to be more socially acceptable in some circles than a moustache on its own.

Here are all the benefits of growing a beard rather than a moustache.

One of the reasons I love growing a full beard is that it is much less work than people think. Sure, you have a pretty rigorous daily routine that can be completed in less than five minutes, but if I want to leave it for a few days, nothing crazy happens.

To keep it looking full, thick, and bushy, you need to shave your cheeks and chin for full hair to contrast with a moustache.

A long moustache requires almost daily care to keep it from irritating your lips and keep it out of your mouth. From trimming through to waxing, there is more regular maintenance with a moustache than a beard.

some protection is arguably the most important reason why beards are better than a moustache.

They protect from UV rays.

UV rays harm your skin in various ways, from sunburn to speeding up the ageing process.

Research published in the journal Radiation Protection Dosimetry by the University of Southern Queensland in Australia examined how efficiently a beard absorbed UV radiation by a procedure called through dosimetry. The amount of UV radiation absorbed is measured using dosimetry.

According to the study, beards can help prevent skin cancer by shielding the skin from dangerous UV radiation by 90 to 95 per cent.

You can see the experimental setup and the amount of exposure relative to the Sun’s angle in the images below.

More of a style change

There are many styles for people to choose from when they are growing a beard.

If you want to know more about every foundational beard style, I produced a massive article showing you the different types of beard styles you can choose from.

Everything from stubble through to chin straps and wizard length beards. I have been through the entire range, and after reviewing many different beard styles, I can confidently say that there is a beard style to match nearly every face shape and growth pattern.

Click here to be taken to my massive and in-depth article.

A wide array of products

If you are the sort of person who likes trying different products, having a beard will mean you are never short of choices.

There are a massive array of beard products, including:

Trying different types of products is a fun past time, and I quite often look forward to finishing my current production batch to go out and purchase a new range.

Sometimes I have to stop myself from buying too many different products as it does take quite a while to go through them.

Great for your skin

Growing a beard is fantastic for your skin.

Not only does it protect you from UV radiation, but it can also:

For more reasons why a beard is great for your skin check out my other article – click here. Some of them may surprise you.

You can have a beard without a moustache

You may consider growing a beard over a moustache if you cannot grow a strong and dense moustache.

The good news is as there are plenty of options for beards without moustaches, and you can see all of them in my other article.

You may decide to grow a beard without a moustache if you want to stand out in the crowd and do something different, have issues growing a moustache that you are proud of, or have accidentally shaved a part of your moustache and want to start from scratch.

Did you know that growing a beard can help you avoid the inflammatory issues of shaving?

At first, a good clean shave can leave your skin looking great. However, for some guys, this sensation is fleeting. The smooth feeling of a fresh shave causes little red pimples all over the face for some guys.

Although this problem affects beard growers of many ethnicities, it is particularly prevalent among African-Americans. According to a 2013 study, “changing shaving practices can prevent lesions from recurring” and “certain skin disorders are more common in skin of colour.”

Many men, however, choose to remove their beards around their necks so that they can be treated with steroids, antibiotics, and retinoids to avoid progression.

This article has been over everything you need to know about the differences between growing a beard and a moustache.

Ultimately, the choice depends on your style decisions and working with your growth density.