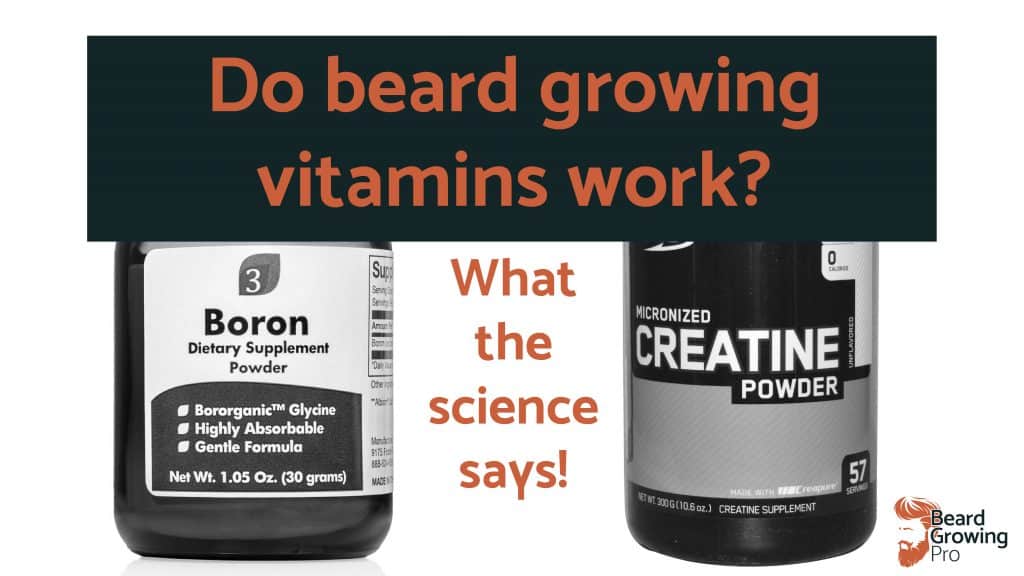 There are tonnes of products that claim magical results for people that are struggling to grow a beard but, for some reason cannot! At best these expensive vitamins are a way to extract your money from your wallet and actually grow your hair. At worst they can cause some serious side effects. So here, we are going to answer the popular question do beard-growing vitamins work?

Beard growing vitamins often over promise and under deliver! The science says that NO – these products do not work as advertised – you are better off speaking to your doctor for other medical-based solutions.

Nothing may seem easier than to pop a pill to solve problems. As humans, we love the idea of a simple pill that fixes our biggest issues. Quite often you’ll hear about a fat pill that promises you’ll lose weight easily.

If you are having problems growing beard check out this blog post where I go through the options if you can’t grow a beard.

Okay, let’s have a quick rundown on the most common beard growing vitamins and how they are supposed to increase beard growth.

How do pills make beards grow?

There’s a range of steps that the body goes through which makes a beard grow. The vitamins and supplements that are commonly used to increase facial hair work by increasing or improving the efficiency of one or more of the steps.

There is one very important chemical in the body and it will either help or hinder your growth potential – that is called DHT!

The importance of DHT

Dihydrotestosterone, or DHT, is made from testosterone by an enzyme called 5AR. It’s the primary hormone responsible for promoting the production of body hair. The more DHT there is in the blood the fuller and thicker your beard growth will be.

Of course, this DHT floating around in the bloodstream needs to be used somewhere. That is where androgen receptors come in. Androgen receptors are activated by DHT and then cause a beard to grow.

All of the beard growth vitamins and supplements that we will talk about in this blog act in one of three ways:

What are some common beard-growing vitamins?

This is a tropical legume that originates from Africa and Asia and luckily there has been a load of research into its health benefits. These include reduced cortisol levels and oxidative damage, decreased prolactin levels, increased levels of testosterone, dopamine, sperm quality and volume, and activation of androgen receptors.

There have been two studies that show the testosterone boosting power of this supplement. It has been shown that it increases testosterone levels by about 38 percent. It can also increase the androgen receptor activity so that it could make better use of the DHT and testosterone already in the body.

That means that mucuna pruriens potentially increase the rate that hair follicles on the face mature.

If you decide that mucuna pruriens are the supplement for you, you should consider keeping the dosage between 250 to 500 mg a day.

For those of you that have seriously hit by the gym bug – you are probably familiar with creatine. It is a white gritty powder that is normally consumed in drinks and mixed with water or in shakes.

Creatine is used by weight lifters because of its ability to increase testosterone helping in muscle strength and mass. It’s this same effect on the male body that will help grow your beard to it’s fullest!

There are plenty of scientific reports that show how well creatine boosts the levels of testosterone in the human body. The good news is that the effects are not dependent on you actually exercising too!

Boron is a naturally occurring element and the last time you heard about it was probably in chemistry class. A small amount of boron is found in plants which is how we get the majority of our intake.

There are a couple of studies that show that boron increases the testosterone and DHT levels found in the body. In one study people were asked to take 10 mg of boron every day and after 7 days the results were very encouraging.

Testosterone levels in the body had risen by 28% and DHT levels had also increased by 10%. The use of boron also decreased the amount of estrogen in the body by 39%.

There are also a load of other reasons that boron is a great supplement. It helps with wound healing and plays an important role in the health of bones…maybe a wolverine-esque superpower can be derived from it…

This is a relatively new supplement for the American market but Indians have been using this for years to promote beard growth.

There are studies that show that this supplement increases testosterone in the blood as well as a whole host of other benefits.

The most beneficial form of this supplement is called ASM-66 and is thought to have the highest amount of beneficial compounds in it.

There are two studies (here and here) that used human participants with both using 5g per day of ashwagandha root powder for 90 days. Both of the studies found significant increases in testosterone – about 40% and 16% on infertile subjects and about 15% in people with no fertility issues.

So although this may sound like another hipster intervention it really is a great supplement backed by the science!

This is a grain from northern Africa and it may be good for growing a thick luscious beard because it increases the activity of 5AR (the enzyme that converts testosterone to DHT).

At the moment, however, there is only one study that took an alcohol extract and found that it increased the activity of the 5AR enzyme by 54%.

So, given that this is only one small study I’d be waiting before buying any of this vitamin. If you have tried everything else on this list – it may be a useful way to check yo see if your 5AR activity needed a boost.

Putting a small amount of sorghum bicolor inside your drink could potentially benefit facial hair growth. Use about 10 grams at a time and monitor the effects over a long period of time.

What are some common side effects?

At the right levels testosterone will provide a range of great effects:

Too high however and it is a different story.

If your testosterone levels are too high these are the side effects you could experience:

All these side effects can all be minimized by responsible use of the products listed above and checking in with your healthcare professional.

If you decide to use these products long term – you could be in for a shock as the longer your testosterone levels are heightened the more risk you are at experiencing adverse symptoms.

Before taking anything new or unregulated speak to your doctor and ask for advice.

Unfortunately, there is not much long term data or studies on the effect of high testosterone levels for us to talk about.

Although there are studies to suggest that some vitamins and minerals increase the presence of testosterone, DHT or the activity if 5AR, we cannot say for sure that any one product will work for any one individual.

So, do beard-growing vitamins work? The science would suggest that you are better off speaking to your doctor.