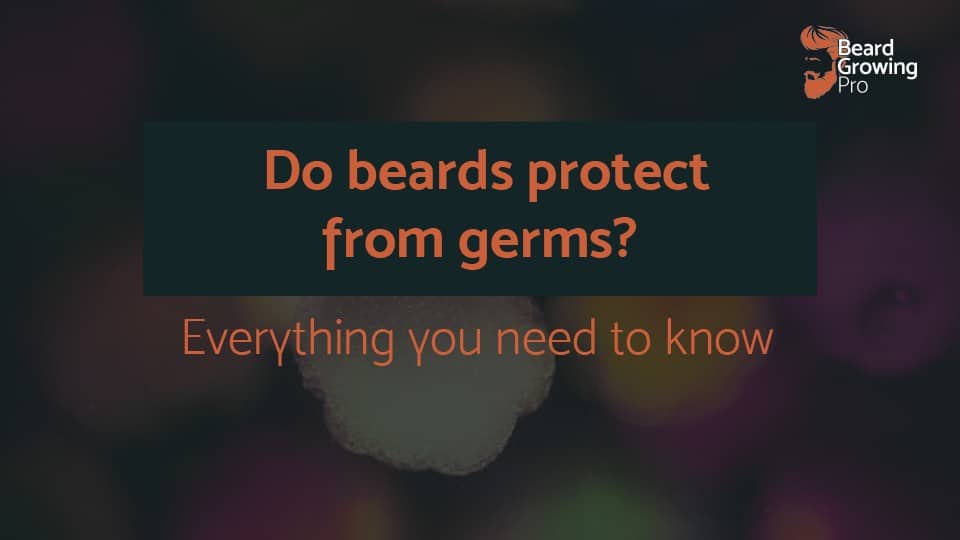 Beards have been getting a pretty bad rap in recent years. There are many news outlets that have reported that our beards contain poo, bacteria, dirt, and our beards are dirtier than a dog’s fur. We just can’t get out of the way of a good germ/beard attack. In this article we are going to look at the science and information around beards and germs. What does the science say? Do beards protect from germs? And is it unhealthy to have a beard?

There are some beard bacteria that kill other, more harmful, bacteria. So beards can actually protect you from some germs – it’s like a little biological warfare in your beard. It has been shown that beards contain the same amount of bacteria as men that are clean-shaven.

When we think about germs we often think about bacteria and fire races but they are so much more than that. The fact is that germs live everywhere. You can find germs in the air, on food, in the soil, and the water you’re drinking right now. And just about on every single surface including your body.

Those are the main categories of germs that we are likely to encounter on a daily basis and may end up in our beard. But the question is does the of a beard protect us from these germs?

If you’d like to know more about beard bacteria I have written a full post on the sorts of bacteria that are inside beards. There is good and bad news – check out my beard bacteria article – click here.

A study completed in 2014, that was published in the Journal of Hospital infection, took a large sample of faces of men who work in healthcare. The researchers were looking for men that had beards and had a sample group that also were clean-shaven. They took swabs from their faces and looked at the number of bacteria on the face.

The scientists found that colonization is similar in male healthcare workers that did and didn’t have facial hair. However, there were certain bacterial species that were more prevalent in workers without facial hair. So there’s the good news – your beard properly doesn’t contain any more bacteria than those people without a beard. In fact, clean-shaven people were three times more likely to be carrying the deadly virus MRSA.

The researchers think that shaving causes micro-abrasions in their skin. Which may support bacterial colonization and proliferation.

This led to an unexpected discovery…

Adam Roberts, a researcher at the University College London, grew over 100 different bacteria in petri dishes that were extracted from beards. In a few of the samples he produced, he found that there were certain microbes that were killing other bacteria. This has to be taken with a grain of salt. These sorts of experiments are hard to translate into a real-world drug – but it does show that beards have microbes that are capable of killing other bacteria.

Therefore, in a way, beards can protect you from germs.

Let’s have a look at a few frequently asked questions about beard and germs.

There are a load of questions that arise when you think about beards, germs and your health. There has been a load of different reports on whether or not beards are good or bad for your health. Let’s take a quick look at what the current state of affairs are in terms of your beard and your health. The first questionnaires is having a beard unhealthy?

Is having a beard unhealthy?

Having a beard is probably not having too much of an impact on your health and things like running and eating well are bigger determinants of how to healthy or unhealthy you are. There are a number of really awesome benefits to having a beard. A 2012 study found that facial hair provided some protection from the sun’s harmful UV rays.

Beards can do a number of awesome things for you including:

For people with asthma, triggers often include dust, smoke and pet dander. This causes an asthmatic response which causes the airways to tighten.

There are some suggestions that growing a beard may stop these irritants from entering the airways by acting like a filter for the lungs. Clearly, if that is the case some beard styles are more effective than others at doing this. A bigger bushier moustache that covers the mouth will be more likely to keep the allergens out of the airways.

However, if you do not look after your beard you may actually be able to make your allergies worse! You have to keep the beard free of allergens by regularly cleaning out your beard.

Clearly, this will not replace other interventions but could be the thing you need to live a life that is a little bit more comfortable.

The hair that grows in your nostrils have evolved to guard the lungs from invasion from bacteria and other particles that you may breath in. Having an additional layer of hair to get through (your beard or moustache) may add to your natural protection.

The beard could act as a filter like in the case of asthma but may also be the thing that traps the bacteria and cause trouble. To take advantage of the filtering nature of your beard and moustache remember to observe a good daily washing and cleaning routine to wash away any of the bad stuff your beard may pick up during the day!

Do men with beards get sick more?

It could be thought that men with beards get sick more often. That’s because when you think of beard you think of it being like a sponge for the environment. Soaking in all of the things around it – including viruses that could cause the common cold. In fact, a good thick beard may actually help protect men from the flu. This is because a beard helps keep the area around the mouth warm. The extra hair works as installation helping to keep the whole head warm and can help protect the immune system by being tested to the max by cold weather.

A study by Yale, showed that there are certain viruses that actually thrive in cooler temperatures. The viruses are able to reproduce faster when it lives on cold surfaces and in cold air. That means a cold virus would rather live on the surface of the skin near the nose rather than in the lungs – where the body temperature is higher and more stable. In this case it seems like a beard is a fantastic way to keep the area around your mouth and nose warm. Which could stop viruses from replicating a lot and entering the airways.

Are men with beards healthier?

There is no evidence in the scientific literature to suggest that men with beards live healthier lives. There are many more factors which contribute to the overall health of a man than just their beard. However, a beard is a fantastic way to determine whether or not someone is particularly healthy.

Often, people can assume that a man who is growing a beard has bad mental health or poor hygiene. Nothing could be further from the truth. So, to keep your beard looking healthy as a signal of your overall health follow some simple shampooing and conditioning backed up with beard products and you cannot go wrong.

So, there we have it, in most circumstances, beards can actually protect you from germs. Germs that include bacteria: viruses and fungi. Although beards have been shown to have a lot of different types of bacteria it has no more bacteria than men with clean-shaven faces. So you don’t have to worry. Having a beard is not a signal that you are carrying a load of germs – as long as you keep it well maintained, conditioned, and brushed your beard can be as clean as any other person’s face.