Does beard growth increase with age? 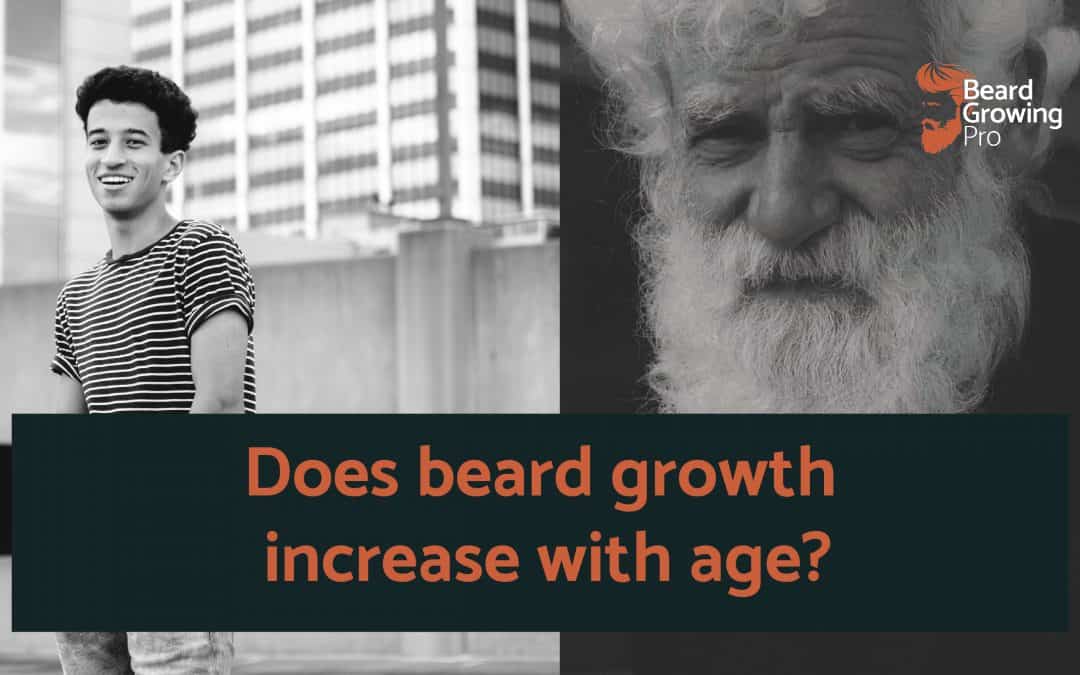 As you are growing a beard you become acutely aware of its changes in length. Sometimes in the early days, it can feel like watching paint dry – but what about as you grow older? Does beard growth increase with age? Or do you have to wait longer for your beard to grow as you get older? Here we’ll go through the science and the experiences of men who are growing beards later in life.

A person’s beard depends on the production of testosterone in the body – this thickens the facial hair and turns it darker and their genetics. Puberty causes the onset of beard growth with most men reporting that their beard grows thicker at the age of 25 plus. After the age of thirty men’s testosterone production reduces by about 1 – 2 percent every year. This can cause a thinning out of beard hair and a reduction in the thickness of men’s beards.

What causes beards to grow?

When boys enter puberty the testicles begin producing the hormone testosterone. It is this hormone that is responsible for growing a beard.

In teenage boys going through puberty, facial hair grows and becomes thicker due to the effect of testosterone on the hair follicles. Before that, there is hair present but it is faint and thin. This secondary hormonal effect is actually seen quite late in the process of puberty and so a lot of boys think that they will never grow a beard!

Hair follicles on the face are sensitive to testosterone and what it becomes in the body –dihydrotestosterone (DHT). DHT is made from testosterone by an enzyme called 5-alpha reductase.

One important thing to note is that: Without DHT there is no beard.

However, there are genetic factors at play that determine the levels of testosterone in the body as well as how sensitive the hair follicle is to DHT and testosterone.

The stages of beard growth with age

Don’t have much time? Check out our video on the topic:

Up until a certain point, beard growth will increase with age. It is the early years of life – specifically around teenage years – where we can expect the hairs on our face to transform into the capability of forming a beard.

I’ve written in detail about the stages and journey of beard growth – click here to read more!

Here are the stages that teenage boys can go through – but remember that each step can vary wildly for each individual depending on genetic and environmental factors.

The mustache forms its own stage in the development of facial hair in adolescent males. Facial hair in males does not always appear in a specific order during puberty and varies among some individuals but may follow this process:

As with most human biological processes, this specific order will vary from person to person, depending on genetic heritage and environment – like the ability to live a healthy and active life.

Testosterone (and beards) as we age

Clearly we can see that there is an important link between testosterone and DHT and the growth of a beard.

We can, therefore, take a look at the amount of testosterone produced in the body as a function of time to determine whether or not beard growth increases with age.

The “normal” or healthy level of testosterone in the bloodstream varies widely, depending on thyroid function, protein status, and other factors.

The decrease in testosterone

As men get older, their testosterone levels may decline by about 1 -2 percent per year after age 30.

Now that can make a tremendous adverse impact on his overall well-being quality of life as well as the growth and thickness of the beard.

Here is a breakdown of the testosterone levels in men at different ages from this source.

This reduction in testosterone from the age of 30 will likely cause the beard to reduce in thickness and color but it is your genetics that really plays a huge part in determining your beard growth.

Check out my other blog post – Can I grow a beard? For more information – click here to read it!

Now that we know how important DHT is to the growing of a beard. Let’s take a look at the steps of hair growth which is important if we are to answer the question of the increase of beard growth as people age.

In the anagen phase of the cycle, the cells in the root of the hair divide rapidly, slowly adding to the length of the hair. Hair will remain in the phase for anywhere from two to six years. At any one time, about 80 percent to 90 percent of the hairs on your head are in this stage of hair growth.

The catagen phase is a short intermediate stage that occurs at the end of the anagen phase. This is the end of the growth phase of the hair and no more cells are produced to increase its length. The hair is detached from the blood supply and lasts for up to three weeks.

The telogen stage is after the short catagen phase. Here the hair is released from the skin and the hair follicle takes a well-earned rest for about three months.

The average person can lose up to 100 hairs per day. After three months, the follicle goes back into the anagen phase and begins to grow new hair.

Importantly, all of the hairs undergo this at a different time and a thick beard relies on a dense collection of hair follicles that are in the anagen phase for a long period of time. Typically, 15 percent of hair is in the final stages of this cycle.

The rate of beard growth

The actual “length” of your beard will also depend on if your hair is straight, wavy or really curly as the length will be as long as your beard falls from your face.

The average person can expect to grow anywhere between 12 and 36 inches before their hair stops growing and falls out.

On average here’s the amount of time it takes to get to each length:

For more information check out my other blog – Will your beard stop growing? Busting the myths!

Does beard growth increase with age?

Your beard growth and age are intimately related. From the moment you go through puberty up until the age of thirty – testosterone is increasing in your body and this will help your beard growth.

After the age of 30, your testosterone decreases about 1 – 2 percent each year. A reduction of testosterone will impact your beard growing potential. But, it’ll be your genetics that will determine the magnitude of that effect.

I am an avid beard grower and after many years of growing and trialing different beard styles, I want to share the tips and tricks that I have learned along the way!

We are an independent source of information on all things beards. Our founder started growing a beard and quickly became obsessed with shapes, styles and maintenance of beards. Here, we want to share all of the tips, tricks and pit falls of growing an awesome beard!