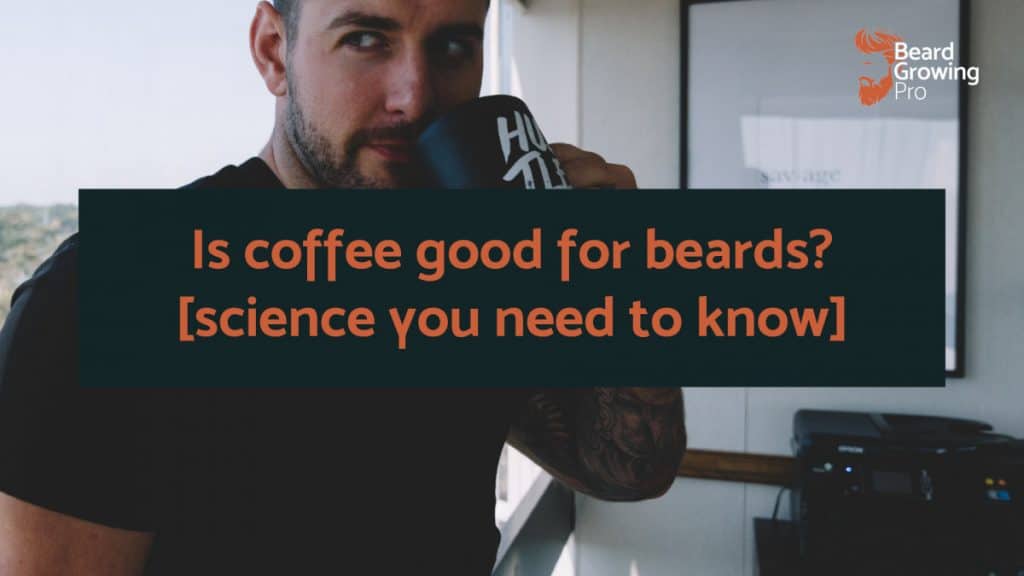 Coffee is a popular drink, and it has been touted as a good remedy for boosting testosterone, increasing beard growth, and giving you the boost of energy required to get you through the rest of your day. I’ve always wondered if there is any science to back this up. In this article, I will look at all of the up-to-date science around beards, hair growth, caffeine, both consumed and topical and try to work out if coffee is genuinely good for beards.

Science says that coffee is good for beards. Consuming coffee can increase levels of testosterone which can be metabolised to DHT and increase beard growth. And topical treatment of caffeine has been shown to stimulate hair follicles for up to 24 hours.

There are plenty of anecdotes about the benefits of caffeine. It has very high levels of antioxidants and other beneficial nutrients. Studies show that coffee drinkers have a much lower risk of serious diseases and the stimulating properties help improve energy levels and reaction times. The fact that caffeine and coffee are stimulants means that after it is absorbed into your bloodstream, it travels to your brain. In your brain, it can block neurotransmitters that can make you feel sleepy therefore improves your energy levels, mood, and other brain functions.

What does caffeine do for beards?

For many years there was only anecdotal evidence of what caffeine can do for any budding beard grower. Slowly the science is catching up, and more and more studies are looking at the effects of drinking coffee and topical caffeine treatment on the skin and hair.

Drinking coffee is often associated with a boost of energy and elevation of mood. Coffee also contains some amazingly effective nutritional benefits and provides a ton of essential nutrients to your diet.

Caffeine is a drug contained in coffee, and it is a stimulant that acts on the brain and nervous system. The effect on your health is very complex. Other than caffeine, regular coffee also contains:

Even though these volumes don’t seem very much, the overall amount can quickly add up if you have a few cups of coffee a day. Keeping your body well-stocked with essential nutrients means that your beard will have everything it needs to grow your beard effectively and efficiently.

Coffee is also jampacked full of antioxidants. Antioxidants protect you against inflammation and absorb all of the free radicals in our body, converting them to a harmless substance that we can then expel through sweat or excretion.

The antioxidant activity of coffee beans and coffee beverages have been known for a long time. Several studies indicate that the high polyphenols content in coffee plays an important role in its strong antioxidant ability.

The coffee’s species and origin influence the concentration of the highly active polyphenols in green beans. In coffee beverages, it very much depends on the brewing procedure. A 1997 study shows that the highest level of antioxidants was found for a medium to dark roasted coffee brew.

A 2006 study showed that the storage of coffee brews also change their antioxidant action. Storing the coffee under nitrogen significantly reduced the amount of degradation of antioxidants, and also higher roasted samples are less vulnerable to oxidation reactions than medium or light roasted coffee.

There are plenty of marketing claims about the topical treatment of caffeine to stimulate hair growth.

It is reported that caffeine increases the amount of cell energy in hair follicles which can promote growth. It does this by acting against a protein called phosphodiesterase.

There is no clinically sound evidence that caffeine has a long-acting effect on hair growth—particularly hair growth, which has declined due to the sensitivity of DHT shrinking the hair follicles.

There is so little evidence that in 2018 the UK advertising standards authority ruled that caffeine shampoo must no longer advertise that it can help reduce hair loss since there was no adequate evidence.

The topical application of caffeine to beards or head hair may help support early-stage thinning but are unlikely to provide a long-term solution for thickening hair growth. However, we know that caffeine does penetrate deep into the hair and is likely to stimulate blood flow to the hair follicle.

Coffee can help with beard growth, and caffeine increases testosterone, will help grow the beard hair is and helps improve blood circulation underneath the skin.

There isn’t too much data and scientific evidence about the use of caffeine to stimulate beard growth directly. We need to take our clues from science related to head hair growth and how it interacts with testosterone.

Balding man loses their hair because of the shrinking of genetically predetermined hair follicles on the top of the head. It is the exact opposite of why DHT stimulates beard growth. By understanding the important interplay between testosterone, DHT, and caffeine, we may understand a little more about whether or not caffeine in coffee can increase beard growth.

In 2007 a study was published in which they looked at the effect of caffeine and testosterone on the growth of hair follicles using cells in test-tube experiments.

They took hair follicles from 14 biopsies of the top of balding men’s hair and exposed them to different testosterone and caffeine concentrations. The amount the hair shaft had grown was measured daily.

They showed that the hair affected by testosterone was counteracted by caffeine and caffeine, leading to a significant stimulation of hair growth. This means that caffeine is responsible for stimulating human hair growth in test tubes and may be able to be used on hairs that are responsive to testosterone and DHT.

A 2012 study looked at the effect of caffeinated and decaffeinated coffee on sex hormone levels.

There are previous studies that suggest a relationship between coffee consumption and testosterone levels. The scientist used a two-week caffeine abstinence phase (to ensure there was no residual caffeine in the participant’s system) and then conducted an eight week randomised control trial. In this trial, 42 adults who were regular coffee consumers, non-smokers, and overweight were given caffeinated or decaffeinated instant coffee in water with each meal in the mid-morning and mid-afternoon.

Given this study, you would expect that testosterone would increase upon drinking coffee regularly. However, this is a relatively small sample size, and other studies will be required to solidify this relationship.

Boosting caffeine’s effect on the beard

Getting caffeine to the area of the skin where it can have the greatest effect is one of the most difficult aspects. Scientists have been working on using different delivery methods for caffeine and minoxidil for hair growth.

They optimised the delivery system for delivery of minoxidil and caffeine into the hair follicles, and topical administration of this formulation more effectively promoted hair growth in rats than commercially available alcohol and water-based topical treatments.

You can see the effects of applying these topical treatments to rats in the photographs below.

The hair length and weight were studied over 30 days to evaluate the therapeutic effect of minoxidil and caffeine in these specialised fat doubles. The growth of the hair was uniform after administration of the various studies; however, the growth rate was significantly different among the groups with rats treated with the optimised formulation showing the fastest hair growth. They were able to grow back most of their hair after only ten days after applying the specially formulated lipid delivery system.

You can see this very clearly in the weight of the hair from each of the rats below.

This study shows us that as long as you can get the caffeine and the minoxidil deep into the skin using advanced delivery systems, the hair responds well, which may increase the amount of growth in as little as 10 to 20 days.

Other ways to boost beard growth

If you want to boost your beard growth, there are some other avenues you can explore that are science-backed and will enable you to perform at your best beard growing capability.

Diet is incredibly easy to fix – it just takes a little bit of willpower to stick to.

Yes, we all want to eat rubbish food – it tastes GOOD! It’s OK to eat chocolate, chips and fast food occasionally. However, your everyday diet should be healthy and nutritious.

Try adding or increasing the amount of this foodstuff in your diet – they are all really tasty and have been backed by science!

Eat healthily, and over about six months, you will start to feel much better. If you want to know more about the best foods you can eat to boost your beard growing potential check out my YouTube video below.

Is coffee good for beards? Summary

This article has gone over everything you need to know about whether or not coffee is good for beards. We have looked at the science and everything there is to know about growing a strong beard enhanced by coffee.

There is clear evidence in the scientific literature that coffee can play an important role in boosting and regulating hormones such as testosterone simply by drinking it. Also, it looks as if topical treatment of caffeine penetrates deep into the skin. The depth is deep enough to stimulate hair follicle blood supply which can support your beard growth.

There is no evidence for long-term effects of the stimulating properties of caffeine but, given the appropriate consumption and topical treatment, it seems like a perfect way to support your beard growth in the short term.