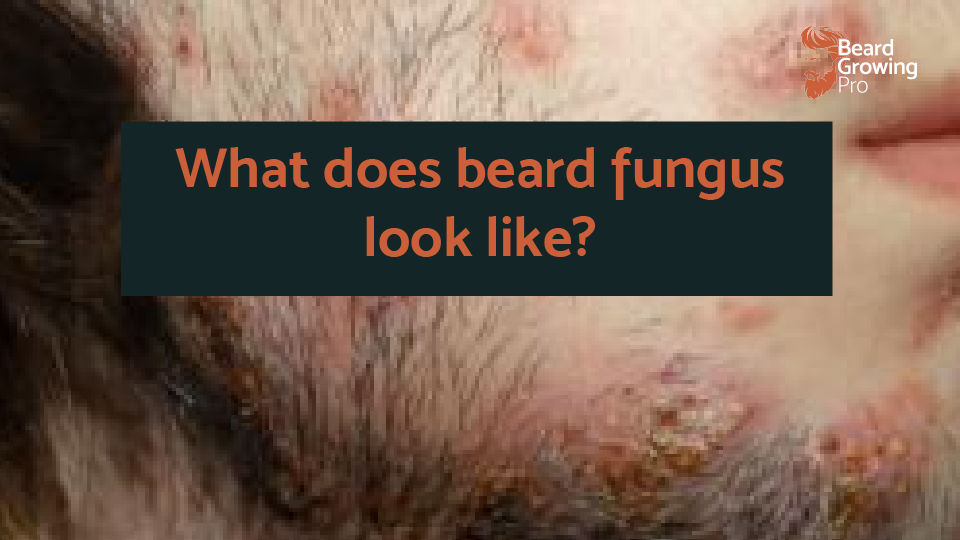 Beard fungus is a surprisingly uncommon problem in adult men with beards. There are plenty of nasties that can lurk in your beard but fungus is a relatively uncommon issue. You may have seen that in the news that beards contain poop, bacteria, or other random bits of dirt. Perhaps, you are looking at redness or soreness in your beard and wondering if it is because of a beard fungus. Or, perhaps you just want to make sure that you are looking after your beard in the best way possible to avoid any bacterial or fungal growth. In this article we are going to go over what beard fungus looks like and the treatments, home remedies, and diagnosis of beard fungus.

The most common beard fungus is tinea barbae which is a fungus which often affects farmers due to its ability to be passed from animal to human. It is usually inflamed red lumpy areas, pustules, and crusting around the hairs of the face. The hairs can be pulled out easily, but it is not excessively itchy or painful to touch.

If you have noticed that your beard is red and itchy it could be that it is not actually a fungus. It could be that you are experienced in bacterial infection which is much more common. If you have just been to the barber and you have noticed that you have small red bumps you could have folliculitis. Folliculitis is inflammation of the hair follicle which is caused by a bacterial infection stop it looks like tiny white pustules with a red ring around it. Barbers often drop their combs and raises into a liquid solution which contains a sterilising ingredient. If they don’t you can end up with folliculitis. We will cover this later on in the article.

The most common (but rare) fungus found in men’s beard is tinea barbae. This is also called beard ringworm because some of the affected areas may have a red ring like pattern – but this is nothing to do with worms, don’t worry!

What does beard fungus look like? A photo of Tinea Barbae

Beard ringworm may be passed to humans from animals. The most common sources are from cows (T. verrucosum) and horses (T. mentagrophytes var. equinum). This means that it most often affects farmers who have direct contact with horses and cows. Luckily, it is very rarely passed from one person to another through things like skin contact or kissing.

Beard ringworm appears mainly in adult men and older teens but has been seen in women with dark facial hair. It is also seen more commonly in warmer and humid climates.

The most common way to diagnose beard ringworm is with a microscope. The doctor will take a series of skin scrapings and pluck a few hairs to have a look at the cells which are present on these samples.

Also, the most common way of diagnosing a suspected infection from beard ringworm is with a simple medical examination.

If the infection is just on the surface of the face ringworm appears as a pink scaly patch ranging in size from about 1 to 5 cm. If, however, the hair follicles are also infected they can present as small pus-filled bumps. If the beard ringworm has got into a particularly deep hair follicle and exists lower in the skin you can see firm red nodules covered with pustules or scabs that may leak blood and pus. In some extraordinary cases the hard pustules may actually mimic tumours.

Not a particularly pleasant sight or feeling for the person infected. Because of the obvious visual symptoms caused by beard fungus people will want to get treated as soon as possible. Let’s take a look at how you treat fungal infection in a beard and if there are any beard fungus home remedies.

How do you treat fungal infection in a beard?

According to a study that was published in 1996, the recommendations for treating beard ringworm is for the person infected to take antifungal medication alongside topical (a cream that you rub in) if suitable for the persons infection.

Another study published in 2003 in the Journal of dermatology look at nine cases of people with beard ringworm and managed to achieve a cure in about 6 to 8 weeks of treatment with systemic antimycotics, 3 cases with griseofulvin, 1 with ketoconazole, 3 with itraconazole, and 2 with terbinafine. All of these are medications which will need to be prescribed and directed by a medical professional such as a dermatologist or doctor.

There are a range of medications and treatments which you can use, and these are reported in the study from 1996:

You can also use topical therapies alongside the above medications and this includes:

Some other things that need to be followed to avoid reinfection is to clean all of your beard grooming equipment so that it is not retransmitted from your comb or brush. You should also avoid sharing brushes and combs as well as hats.

Because it is likely to have come from an animal such as a horse or cow. You must search out the infected animal and ask a vet about the appropriate treatments for that animal.

Because of the nature of beard fungus and how hard it is to get rid of there is no home remedy which would work effectively enough to completely cure the beard ringworm.

If you suspect that you have beard ringworm you should immediately seek out a doctor’s opinion so that they can look at the area which is inflicted and take skin scrapings and hair follicles for examination under a microscope.

Perhaps, your beard is red and itchy for a reason that is nothing to do with a beard fungus. Given that capturing a beard fungus is relatively rare you could have a bacterial action instead.

Does bacteria grow in beards?

Yes, bacteria does grow in beards and it can result in some unpleasant side-effects and symptoms. If you want to know more about beard bacteria check out my other article – beard bacteria, what nasties are lurking in your beard? – Click here to be taken to article.

Here, we’re going to go over all of the most common beard bacteria is that could be causing your redness, itching, swelling, and more.

The most disgusting microbe was Enterococcus faecalis. This is a common gut bacterium responsible for urinary tract infections and other health issues.

Beard fungus and beard ringworm are relatively uncommon and are only really an issue if you currently work with farmyard animals.

However, you may have an infection caused by bacteria which causes folliculitis. Folliculitis is a reddening and swelling of the beard hair fall calls which can result in painful swelling and acne.

The bottom line is that if you feel like you have any redness, itching, swelling, or other symptom that you cannot get rid of you should seek help from your medical professional. They will be able to diagnose your issues correctly whilst also giving you access to medicated topical treatments and oral medication.

Happy beard growing and good luck getting over whatever issues you currently have with your beard!