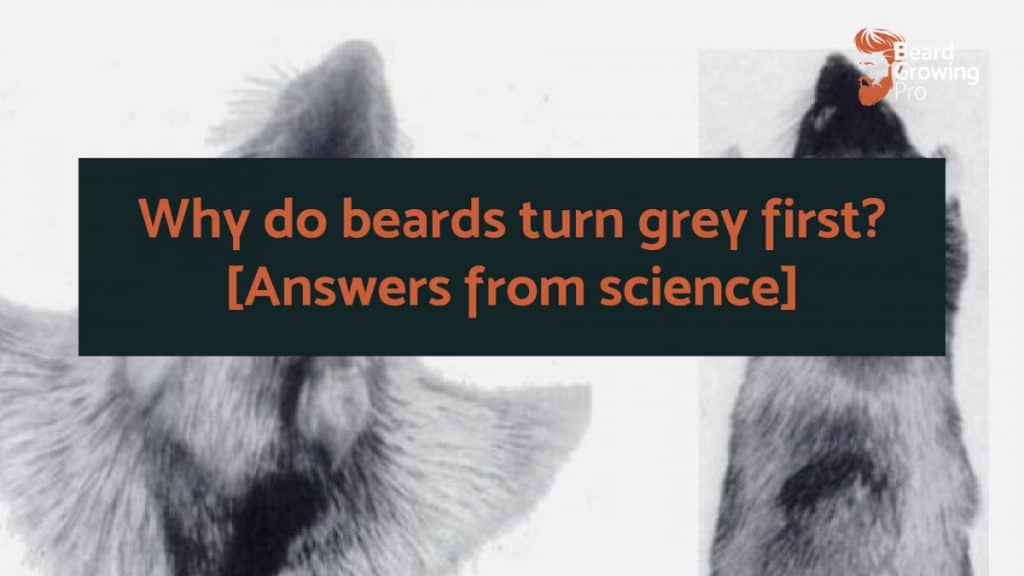 Beards change over time and one of the most marked changes is when the first greys start appearing in your beard. Hairs in my beard between the ages of 30 and 35. They started at the sides of my beard – by the sideburn – and quickly made their way to the front. Every so often I see one as it falls out and its complete lack of color always surprises me. I have got a few greys growing on my head hair and many people notice that their beard turns grey before the rest of their hair. In this article, we are going to talk about the reasons why beards turn grey first and everything you need to know about stopping your beard from going grey, and science around reversing the color.

Beards turn grey first because the color building blocks of the beard hair – melanin – stops being produced in the hair root. Some people notice this happens before greying in the head hair potentially due to the different growth rates of the hair at different parts of the body.

When you look in a mirror your beard is one of the first things that you look at and inspect whilst the hairs on your head are hidden from your sight due to the perspective while looking in the mirror.

This simple fact may cause people to think that the hair in their beard is going grey before the hair on their head when in fact it is happening simultaneously.

At what age beard starts greying?

Generally, men firstly experience their aging process through grey hairs on their beards. In general, most men show signs of aging in their 30s, however, for some, it might happen as early as at the age of 23.

I asked over 3000 men and this was their response as to when their bread first started going grey:

If you want to know more about at what age your beard goes grey you can check out my other article – click here where I go through all of the science and ways of stopping your beard from going grey.

Once men start aging, they start noticing grey hairs on their beard, and none on the hair. However, for some people it happens simultaneously. It is important to know that this process does not happen overnight, meaning that your beard or hair will not turn grey totally in a few days or months.

To some men, this comes out as a concern, however, you should know that grey hair nowadays is regarded as a symbol of wisdom and dignity.

An interesting study published in 2019 look at the perception of how good a doctor is based on the colour of their hair. Scientists looked at patients treated at a Swiss tertiary care hospital between 2013 and 2016. They investigated associations of gender and physical appearance within hospitals mortality and the perceived quality of care which was assessed by a telephone interview 30 days after admission.

That just goes to show that if you have grey hair on your head or beard it is (at least in the case of doctors) an indication that you are more likely to survive your hospital visit.

Why does beard hair turn grey?

Normally, hair turns grey due to melanin depletion. The color of the hair on the body is determined by the melanin that the hair follicles produce all the time. However, as you age, your body begins producing less and less melanin, and with time, your hair turns grey. There are many reasons for why your beard hair may turn grey. It comes down to a combination of genetics and lifestyle factors.

According to scientists, the time of the appearance of grey hair is connected to the interferon regulatory factor 4 (IRF4) gene since this gene is responsible for regulating the melanin in the body. That means that if someone from your family has this gene, there is a high chance that you have it as well. Therefore, if that person has turned grey early, there is a high chance that the same occurrence will happen in your body.

Since you can neither change genetics nor you can turn back the clock, there is nothing to be done about this fact. However, there are some factors that might influence the turning of the hair grey that you can control in some way.

Diet is something you can control, and that way you can control the greying of your hair. According to research, the diet you lead on a daily basis has a significant impact on the reduction of melanin.

This means that, if you have a healthy diet, maintain a normal weight, and avoid alcohol consumption, you may influence the greying process in some way. You might not be able to stop it, but you could at least slow it down.

If you want to find out which foods help increase beard growth check out my YouTube video, below, where I go through some of the best things to eat for protecting your beard growth.

Several studies have shown signs of a connection between smoking and the early occurrence of grey hair. A study published in 2013, looked into smokers’ hair and investigated the question: does smoking cause premature hair greying?

Furthermore, smoking has also been associated with baldness, meaning that it can really impact the natural processes of our bodies.  Therefore, if you want to prevent premature greying of your hair, you should avoid smoking at all costs.

Does stress cause grey beard?

There is no doubt that stress can have a variety of really bad effects on the body. Up until a recent study, in 2020, the popular idea that stress can cause hair to turn grey was not scientifically proven.

Researchers wanted to test and determine if stress can cause hair to grey and if it did how it did it.

The researchers used mice to examine the effects of stress on hair color. The mice were exposed to 3 different types of stress involving mild, short-term pain, psychological stress, and induced stress by restricting their movements. The results were very interesting… All of the mice put under each form of stress caused a noticeable greying in their hair which meant that the color building blocks had been lost at the root of the hair as it is growing.

The question is – how?

They first wondered if there was a link between stress and the immune system attacking the color building blocks. Like in many scientific studies – their initial thoughts were incorrect. Mice with compromised immune systems still lead to grey hairs under stressful conditions.

After a few different avenues and tests they found that the stress hormone and noradrenaline along with corticosterone were elevated in the stressed-out mice. They found that this was the key to stress induced hair greying.

This flies in the face of other science. Professor Rodney Sinclair from the University of Melbourne told the daily mail that this stress doesn’t cause hair or beards to go grey.

Professor Sinclair says that the genetic factor is the single biggest determinant in causing greying of head and beard hair. Despite many studies looking into it, there is nothing to suggest that stress, diet, or lifestyle has any impact on the color of hair.

This is only a study in mice and quite often the science doesn’t translate very well from mice to humans so we still don’t quite know if stress in humans causes grey hair. The science is still yet to determine that.

Can B12 reverse gray hair?

One of the earliest studies I could find about vitamin B12 and grey hair was from 1939. In this research black rats were fed for several weeks on artificial diets which lacked certain factors in the vitamin B area. They observed that the black hair turned grey. However, whether or not certain the vitamins can reverse grey hair if taken after the hair has already turned grey is not yet confirmed by science.

There are some studies that use B vitamins to stop fox fur from becoming grey – but none of them have been able to confirm that it can be effective in reversing hair discoloration.

One website, says that vitamin B is helpful in reducing and preventing hair turning grey. And that taking 25 mg to 50 mg of vitamin B1 and vitamin B two will help maintain healthy hair.

Also, they note that having a deficiency of B12 leads to anemia. Something that is common in vegetarians and vegans. This leads to a lower rate of blood cell count and can help promote the greying of hair if left untreated.

A healthy diet for preventing early greying hair should include foods rich in a vitamin B complex. This includes:

Drinking plenty of water and also eating fish which are a good source of Omega three can help keep your hair growing as healthfully as possible.

In this article, we have gone over everything you need to know about why beards appear to turn grey before had hair. In some instances, it is simply because the hair on your beard is much more noticeable when you look in the mirror than the sides of your head – near the temples – where grey hairs originate on the scalp.

We have also investigated some of the reasons why beard hair is turned grey and the science behind using vitamin B12 to delay the onset of greying beard hairs. The science is still out on that one but it can encourage you to eat a very healthy diet which will certainly help in your overall health which will certainly help your beard growth overall.