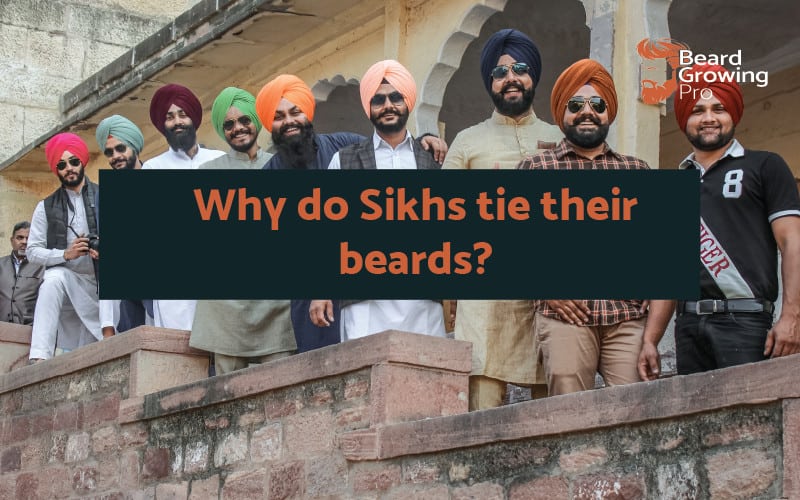 You may have seen Sikhs with a thin cloth over their beards or beards that have been tied up and tucked under the chin. Many Sikhs tie their beards simply because their religion dictates that they cannot cut their hair. Sikhism is the fifth-largest religion globally, and males in this religion grow a beard as a sign of freedom and respect to their God. Sikhs consider the beard an integral part of nobility and dignity and a respectful token towards manhood.

In the areas where being Sikh is most common, cutting hair is a sign of slavery. The Sikhs have always promoted equality and challenge rituals and injustices in society. That is what makes a Sikh beard particularly powerful – it is quite the statement.

Ways that Sikhs tie their beard

There are two ways that Sikhs can tie their beard. The first way is by twisting the beard until it forms a spiral and then knotting it up and tucking it in behind the chin area of the beard. The second way Sikhs tie their beard is by using a thin cloth called a Thatha or Thathi which means beard band in English.

Without a beard band

The simplest way for Sikhs to hide their long beard is by twisting the end of the beard and tucking it up underneath the chin area of their beard.

The process is as follows:

Sikhs can handle quite a long beard and keep it looking like a much shorter beard using these steps.

A video explaining this entire process is shown below.

With a beard band

The second way that Sikhs hold their beard against their face is by using a thin cloth material called a Thatha or Thathi.

The first step to using a beard band is to remove the turban. Under the turban, Sikhs generally wear a small handkerchief like cloth that covers the hair. This small piece of cloth is kept on as it helps hold the hair flat and inside the turban.

After the turban has been removed, the process is as follows:

The process of placing a beard into a beard band is shown in its entirety in the video below.

This full process can take a relatively long time, so some Sikhs do not opt for this process but rather use a knot without a beard band or do not tie up their beard.

Some Sikhs also choose to have a plat in the centre of their beard instead of tying it up into a knot or tucking it into a beard band.

Why do Sikhs not cut their hair?

Sikhism originated in the 15th century in the Punjab region of India. Male Sikhs generally have the surname Singh, which translates to lion as their middle or last name. Sikhs who have undergone the baptism –an initiation ceremony known as Amrit Haft to have on their body at all times five things.

The origins of not cutting hair

Not cutting hair originates in 1699 where a guru requested Sikhs to assemble at their annual spring harvest festival. According to the sick tradition, the guru asked for a volunteer. One came forward, who then he took inside a tent. The guru returned alone with a bloodied sword. He asked for another volunteer and repeated the same, returning from the tent without anyone and a bloodied sword. After the fifth volunteer went with him into the tent, the guru returned with all of the volunteers safe and sound.

The guru then mixed water and sugar in an iron bowl, calling it nectar which then he administered to the five volunteers. The guru also gave them the surname Singh. After some more ceremony, he initiated the 5K’s of the Sikh tradition, which we talked about above.

Since this time, Sikhs have decided to stick with the five practices outlined above. There are two types of Sikhs, those initiated and those who have not undertaken an initiation. These are two separate religious entities. This tradition has survived into modern times, with initiated Sikhs referred to as Khalsa Sikh, while those who do not get baptized are referred to as Sahajdhari Sikhs.

There are other beard rules, such as a Sikh not being allowed to colour his beard.

Can a Sikh colour his beard?

Although many modern Sikhs decide to colour their beard, there are rules which directly address this question. In CHAPTER XIII, Article XXII – Panthic Rehni (Facets of Corporate Sikh Life) it states that anyone who dies his beard shall be liable to chastisement involving automatic boycott.

Even though I am not familiar with the specifics of the seek religion, it appears that buying a beard is not allowed.

Therefore, I understand that the dying of a beard may contradict some of the important tenets of being a Sikh.

The tying of a beard is not limited only to Sikhs.

Reasons to tie a beard

Besides religious reasons, there are many reasons for others to tie up their beard. These include:

In this article, we have gone through everything you need to know about why Sikhs tie their beards at the front. The main reason is that their hair gets very long since their religion forbids cutting the hair. Some Sikhs do not tie their beard at all and let it sit naturally and flow from their face. However, some Western orientated Sikhs do it to enhance fashion and improve their appearance.

There are two ways that a Sikh can choose to tie a beard – with and without a piece of cloth.

It comes down to personal preference as to which one each person prefers.