Why does my beard look Amish? Five FIXES! 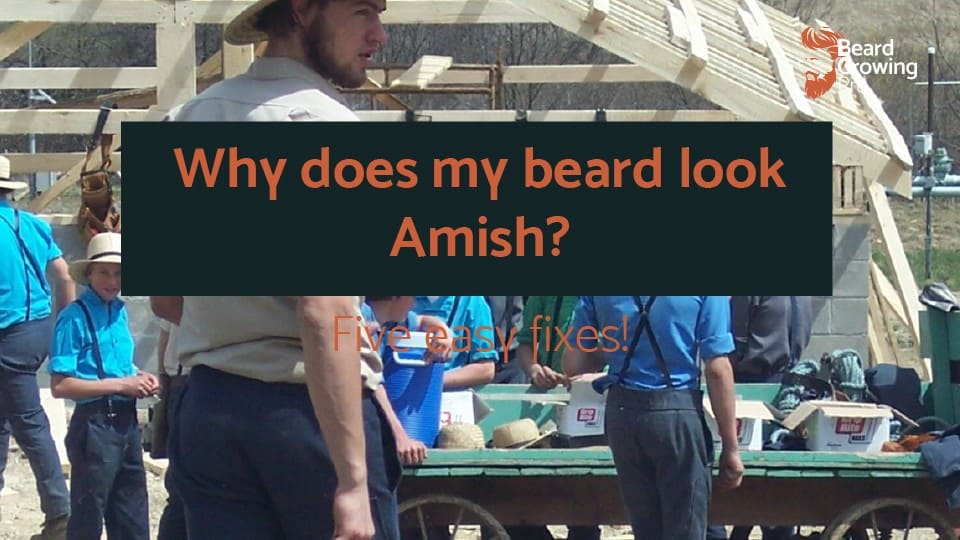 A beard looks Amish because of the growth pattern and density. Quite often in younger beard growers the density is thick around the neck and chin which adds to the “Amish look”. To tackle this you can trim up the bottom of the beard while allowing the sites to grow and focusing on cultivating a thick and long moustache.

In this article we are going to go over all of the reasons why your beard may look Amish and also look at the top five things that you can do to tackle an Amish looking beard and turn it into the beard of your dreams.

A full-length Amish beard is viewed as a symbol of wisdom (which seems to be backed up by the psychology science experiments above) of status and respect. The beard signifies for Amish men that men are inherently different from women and that God intended for a clear division between man and woman.

Younger men in the Amish condition may have a short beard and as Amish males move into their 30s they’ve start to wear a fuller and longer beard stop rather than just wearing a wedding ring and Amish man can also signal that his taken by growing a beard. In some Amish communities the men begin wearing a beard of marriage – so is an obvious signal to show that he has become a man… Or whatever that means to that community.

An Amish beard is identified as a beard with a very long chin and jaw area whilst keeping the moustache short or nonexistence. The top line of the beard can dip below into the cheek and take off a fair amount of hair from under the bottom lip or it can include the hair under the bottom lip.

I think one of the most defining features of an Amish beard is the lack of a moustache.

As Amish men get older, the longer the beard gets. In some Amish communities they do not trim the bottom of the beard and therefore you can use this fact as an advantage if you want to make your beard look not Amish.

Simply by growing a moustache and trimming up the bottom line of the beard will be your first line of defence of making your beard no longer look Amish.

Let’s have a look at the other reasons why your beard may look Amish.

The reasons your beard looks Amish

There are a variety of reasons why your beard may look Amish. Ultimately, it comes down to the growth pattern, the density, and how you line up your beard. Amish beards aren’t necessarily a bad thing but if you are not aiming for one air can be really annoying. The sort of growth pattern and density which leads people to think that their beard is looking Amish is commonly seen in younger beard growers. This is because a younger beard grower has not developed a full and even thickness of the density right across the surface of the face and have more hair growing on their chin than on their cheeks or moustache.

This is what causes your beard to look Amish.

Luckily, there are a range of different things that you can do to stop your beard looking like an Amish beard.

Growth pattern and lines of the beard

As you are growing your beard the density and thickness of the beard changes over time. If you want to know how my beard growth changed with my age check out my YouTube video where I go through what my beard looked like when I was 17, 21, and now at 35.

An Amish beard is thick and long under the chin and along the jaw line. This is where the majority of men have a good growth pattern and density. Therefore, you can see that, left alone, a beard can very quickly grow naturally like an Amish beard.

If you are sporting a beard with a particularly thin moustache or a closely shaved moustache it can very quickly look like an Amish beard. Having a beard without a moustache isn’t necessarily a bad thing. There are beard styles such as:

For a full run down on all of the different types of beard with a moustache and how to select one that is better for you (if you don’t want to grow moustache) check out my other article – beards without a moustache – click here.

In that article I go through everything you need to know about selecting a moustache style that won’t make you look Amish.

Perhaps you have been growing your beard for a long time. A longer beard seems to look more religious than a shorter beard. In some Amish communities they do not cut their beard after they are married and so end up with very long beards as they get older.

If you are sporting a long beard you don’t necessarily have two lose any length to stop your beard looking Amish. It is very easy to line up the bottom edge of a beard to stop it from looking like you are forbidden from trimming it. Sacrificing a small amount of length for style is something that is very often the thing you need to do to make your beard denser and better looking.

Because of the religious aspects of growing out a beard many Amish men choose not to trim up their beard at all.

This is where you can easily make your beard look not Amish by simply trimming up the ends and getting rid of all of the scraggly hairs which escape the line of your beard. For some reason there is a distinction in society’s mind where if your beard looks intentional (lined up and well-conditioned) it does not look as if you are religious. However, the same beard with scraggly ends and left to do what it once makes you appear more religious than you probably intended.

How to stop your beard from looking Amish

Stopping your beard from looking like an Amish beard is remarkably easy if you know where to trim up and how to look after your unique beard growth patterns. Everyone’s beard is different and therefore you may have two try these options in a different order to work out which ones work for you.

I often joke on my YouTube channel that one of the best things you can do for nearly all beard problems is wait. Initially waiting may cause your beard to look more Amish if you are the sort of person that can grow awesome thick dense beard hair under your chin and on your jawline. However, the one thing we are doing is giving your beard enough time to fill out in the cheek and moustache area so that it can be trimmed up to look less Amish.

Wait for at least two months before you consider trimming up your beard. I find that whenever I go through a growth cycle my beard looks way better at the end of it after I have trimmed up the parts that I am worried about. You should consider giving this a go and just accepting that for two months your beard may become more Amish before it gets better.

Because the Amish beard is defined by a very closely shave a moustache or no moustache at all you should consider growing out your moustache. A thick moustache can even be taken as far as what is known as a beardstash – whether moustache just looks so thick that it becomes a beard on its own.

Another area that you can consider growing out is the area under your lip. This area is also trimmed up quite a lot by Amish communities and so having particularly long beard hair under the lip will allow you to differentiate your beard from an Amish beard.

3. Trim up to balance

After you have waited at least two months for your beard to grow out, that is the time when you can trim up your beard to balance out the growth to make it look less Amish.

Trimming up your beard and removing the weight from underneath the chin should be the first thing that you consider doing. By removing the weight which has accumulated at the bottom and rounding off the area at the front of the beard you can easily balance out a beard.

If you are struggling to grow beard hairs on your cheeks to connect your moustache to your beard you should watch my video where I go through everything you can do about it:

Amish men do not use products on their beard. And that means that a Amish beard looks drier and more wispy at the ends then a beard that is well looked after.

You should consider using a beard oil, beard farm, beard conditioner, and beard shampoo to keep your beard looking its best. Here is my daily beard routine which you can use to base your own beard product routine on:

Creating an awesome daily beard routine will be the number one tool that is able to turn your dry and brittle hair into awesome, shiny, soft hair. Here is my simple beard routine that I follow every single day. Feel free to use this as an inspiration for crafting your own beard routine.

Use different products in order to test whether or not they make your beard better or worse. By using different beard products you will be able to slowly hone in on the ones that work best for your beard.

5. Line up the beard to maximum density

The last bit of advice that I have for you is to trim up your beard to its maximum density. The ends of a beard can quickly become see through and thin as your beard grows.

One of the most important tips I discovered myself was that if you trim up your beard to the point where it is at its maximum density it is more likely to look thicker and fuller. Sacrificing a little bit of length for a more substantial beard is something that I have never regretted.

There are all of the things you can do to make your beard stop looking Amish. Your beard looks Amish primarily because of the natural growth patterns and the way you have allowed your beard to grow. By trimming in a shape which takes away the weight from the bottom of the beard you will see a significant shift away from the Amish look.

Take good care of your beard by investing in a good range of beard products and trim up your beard to the point of its maximum density and I am sure that your beard will look less Amish very quickly!

I am an avid beard grower and after many years of growing and trialing different beard styles, I want to share the tips and tricks that I have learned along the way!