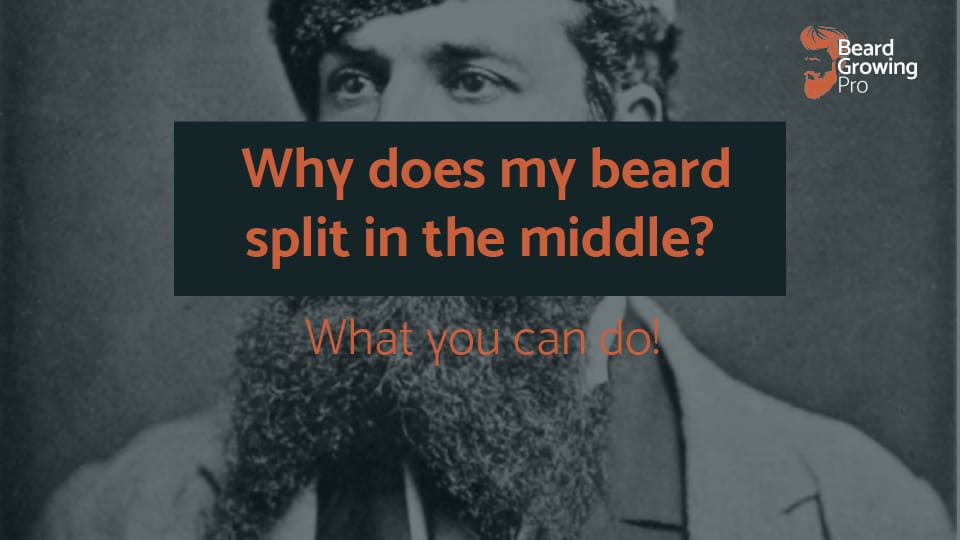 It happens to many people with long beards. Beards splitting naturally as they fall are a common issue that many men face. No matter what you do to try and tame the split – nothing really seems to work. Here, we’re going to go through the ways that you can tame the beard split and why it happens. BTW, it’s not a bad thing either…in fact, it’s coming back into fashion!

Beard splits happen at about 15 inches of hair growth. It is caused by a number of factors and the most important one is the difference in beard growth rate on your chin compared to the sides of the jaw. This is ultimately determined by your genetics.

The hairs at the center of the chin grow slightly slower than the hair on the sides of your jaw, causing a gap to appear.

Beard splitting is also known as a forked beard and a french fork! The strange thing about that is that it didn’t even originate in France! It can be a really frustrating growing style that puts to bed your ideas of a thick pointy and wizard-like beard. The good news is that there are a few things that you can do about it. None of them are particularly challenging or time-consuming.

Before we launch into everything you can do to combat a forked beard, let’s take a look at the reason it has formed in the first place and the history of forked beards.

What is a forked beard?

A forked beard is a long beard that splits in the middle – either naturally or by design. The beard can also be called a french fork due to the fact that french forks only had two prongs. There are also comments online that state that it is called a French fork because it was popular in France for many years, centuries ago.

There are many examples of split beards in history and the word on the street is that they are coming back into fashion too! So maybe your natural split is something that you want to keep!

Besides being a style that you can aim for, a forked or split beard is quite often something that people find their beard does naturally as it grows longer than about 14 inches. There are many reasons why beards grow the way they do on certain people and they basically all come down to one thing – genetics.

Genetics play a large part in anyone’s life – a large part of who you are physically and emotionally is due to the traits that you have inherited from your mother and father. There’s no escape from genetics! Besides genetics, there are also some other factors that may be making your forked beard more prominent…

Theories for why it happens

If you look online at forums you’ll see that this is a common issue, there are many theories online of what makes a beard split more likely, or not. Let’s take a look at some of the most popular one found online.

Your genes are the main biological determinants of your beard growth. The genetics of beard hair is not just interesting from a cosmetic perspective but also gives us an indication of evolutionary patterns in humans.

Research performed in 2016 looked at the influence that genes have in over 6,000 Latin Americans on head and facial hair. They correlated physical features of hair growth with their genetic make up – an approach known as a genome-wide association study (GWAS). They identified a gene, a variant of the EDAR gene, previously associated with hair thickness in East Asians, which seems to cause facial hair to grow more sparsely and scalp hair to grow straight.

“with the exception of hair colour, we don’t yet understand nearly enough of the genetic basis of these traits for them to be useful”

This insight allows you to see how interlinked your genes are to every physical feature about yourself! There’s no fighting your genes. So do your male relatives also have forked beard? If they do you are more likely to have a forked beard too!

Hair grows slower on your chin

In the early days of growing a beard, this difference is not obvious as the hair is short and curly enough to hide any difference in length. However, as the hair gets longer the tiny difference in hair growth rates gets more obvious. right in the middle of the chin, the skin is stretched a little bit more around the bone structure. This causes the hair to point in different directions and very few are actually pointed straight down – this is where the split can originate.

On the side of the face and jaw, there are no massive changes of hair direction and the hair grows largely in one direction. Combined with a change of hair density over the entire surface of the face – your beard may just be more prone to forking than other people beards!

There are also some other theories that relate to the maintenance of your beard:

Bias in brushing your hair

As we maintain our beards and groom them into the shapes that we want – you may accidentally be brushing on the sides more than the front – causing your forked beard to become more prominent.

All of us have little biases when it comes to maintaining ya beard. You may spend more time on the right side of your face. You may be holding the beard at a different angle when brushing a certain side of your face. Do it every day and that could add up to a more prominent split beard.

There’s no evidence to suggest that this is the leading cause of a forked beard but taking a moment to look at your grooming schedule may help you improve the maintenance of your beard in the long run.

There are also some other theories online that using a hairdryer more or less on certain parts of your beard could introduce a fork too.

When you think about it,we are pretty ruthless when it comes to maintaining our hair:

How there are any hairs actually left on our face is a bit of a miracle after all of that! Nonetheless, breakages do occur and they are more liekly if you do any of the above things to your beard.

There is a very small possibility that you are giving your chin more attention than the rest of your face and causing more damage on that part of your face. That could potentially be causing your beard to fork and split more!

So, how do we minimize the forking? Let’s take a look…

How do I stop my beard from forking?

As mentioned above, there really is no fighting your genetics but there are ways that you can minimize the effects of forking and split beards. Some of them are not particular trendy and may seem a little goofy – but perhaps they will work for you…

Braid in the middle

A regularly, mentioned method for minimizing beard forking is to put a braid or plat in the middle of the beard. braid do an awesome job of bringing in the hair surrounding the gap and holding it into place. There are two ways that you can use braids:

Either of these options are worth a try if you feel like your hair needs a little bit more control!

How about grabbing some hair ties or elastic bands and creating a ponytail from your beard. Like the above option, it doesn’t need to stay in all day – just while it is drying if you don’t want to venture into the world with one.

I’ve also seen men with really long beards use multiple bands regularly spaced on their beard from their chin to the tip of their hair. It may not be suitable for an office environment but perhaps you can use this look on the weekend?

You also have the option of using products to control your forked beard. Now, the issue is you can’t just use any product to hold such a large feature in your beard. You have to use a beard wax with a very strong hold!

Think of the level of hold you need to get a handlebar mustache to stay upright and resist gravity, wind, and facial movements! That is the level of hold that you will need for a beard with a split. Beard oil, butter or balm may also work but they provide a weaker hold. I suggest starting off with a strong hold wax. If that won’t do it, none of the other products will be able to.

If you find that a wax does work for you, you could try to reduce the strength of the wax product until you find the right balance between hold and aesthetics.

Check out my recommended tools for my favorite beard balms and waxes.

Let it grow out

The last option for you is to see if adding a significant amount of length to your beard will help with the forking. You’ll be amazed at the number of beard issues that can be resolved by simply growing the beard for a longer amount of time.

Be patient and maybe the weight of your beard will bring everything together again!