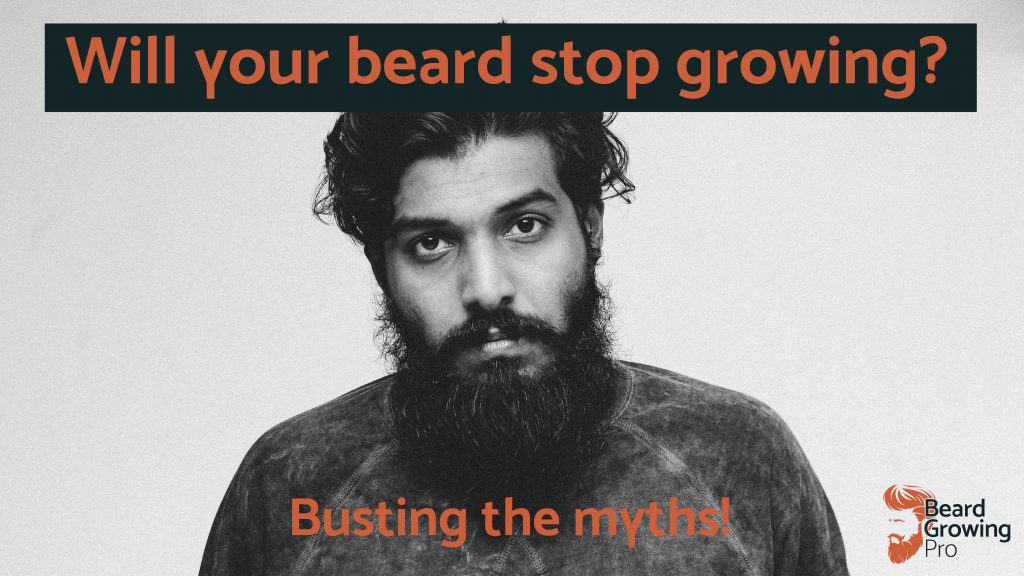 There are some lOOOOOng beards in the world! There’s no doubt that growing a beard takes patience and sometimes it may feel like your beard has stopped growing. The correct term for the final length a beard will reach is called its terminal length. But what does this mean and will your beard actually STOP growing or getting longer?

Hair never stops growing it goes through three stages and can only reach a certain length before it falls out. It is the hair growth cycle that limits the maximum length that can be achieved and this is different from person to person.

Here’s the first thing that you need to know: your beard will never stop growing! FACT!

Your beard will never stop growing (once it starts)

The three stages of the hair growth cycle

Once the fair follicles on your face have been activated the hair growth goes through three different stages.

Take a look at this simple graphic that highlights each of the stages of hair growth.

In the anagen phase of the cycle, the cells in the root of the hair divide rapidly, which then slowly adds to the length of the hair. The emerging hair will remain in the phase for anywhere from two to six years. About 80 percent to 90 percent of the hairs on your head are in this stage of hair growth at any one time!

The telogen stage is after the short catagen phase. Here, the hair is released from the skin and the hair follicle takes a rest for about three months.

Sometimes, when I’m stroking my beard it can seem like I’m pulling out a load of hairs. But fear not! The average person can lose up to 100 hairs per day.

Importantly, all of the hairs undergo this at a different time and a thick beard relies on a dense collection of hair follicles that are in the anagen phase for a long period of time.

So, given that the hair has a “growth lifetime” surely it can only get as long as it remains in the anagen (growth phase), right?

Well, there is a natural limit but that depends on each and every person’s beard growth rate vs loss rate.

Clearly, if this is the world record it’s very unlikely that your beard will get longer than this. Also maybe a 5.33 m beard is also something that you don’t aspire to.

Hair has what is called a terminal length but what exactly does this mean?

What does terminal length mean?

The average growth phase it between two and six years although this is heavily influenced by your genetics, race and hair type. If your growing phase is on the shorter end (two years) you can grow a maximum of 12 inches. However, the average person can expect to grow anywhere between 12 and 36 inches before their hair stops growing and calls out.

Although some people will have a genetic advantage, there’s a natural limit on the length that you can achieve with your beard. There are ways that you can increase the length of your beard by increasing the amount it grows in the anagen phase.

It’s all about getting that testosterone level up!

Increasing growth in the anagen phase of the growth cycle

The more testosterone you have flowing around in your body the more your beard is stimulated to grow as it is in the anagen phase. If you are struggling to grow your beard at all, check out this link!

There’s a lot of research that demonstrates how effective exercise is at getting your testosterone levels up! Not all exercise has the same potency, however. Make sure your exercise contains these activities:

Try this example routine as a workout:

Do this at least three days per week and you should notice an increase in your overall health alongside a thicker and more substantial beard.

Combining your exercise with a diet that will promote testosterone production in your body can help grow your beard longer during the anagen phase. Try adding or increasing the amount of this foodstuff in your diet – they are all really tasty!

If you are stressed your body produces more cortisol – the human stress hormone. High cortisol levels are correlated with lower testosterone levels – but this does not mean that cortisol causes low testosterone.

Let’s see what the science says:

A study, published in the journal Hormones and Behavior, looked at the relationship between the two hormones.

Scientists measured hormone levels in 57 men who were pitted against each other in one-on-one competition. The cortisol and testosterone levels of the participants were measured before and after competing.

The men who lost the competition were asked if they wanted to compete again. All the men who declined had high cortisol levels as well as a drop in their testosterone levels. It could be that this is the body’s way of preparing you for escaping after losing a ‘battle’.

Low testosterone and high cortisol share the same symptoms. So it can be hard to differentiate between what is happening in the body. To reduce stress in your life is always a good thing! Linit these things to make sure you are minimizing the stress in your life:

Make sure that you follow these rules and your stress will be low and, if nothing else, you’ll be able to concentrate on your beard growing!

The question “Will your beard stop growing?” is a little bit of a misdirected question in that beards continuously grow. It’s the hair growth cycle that limits the maximum length that can be achieved. This varies from person to person. There are ways, however, to increase the length hairs can reach while they are in the anagen growth stage!