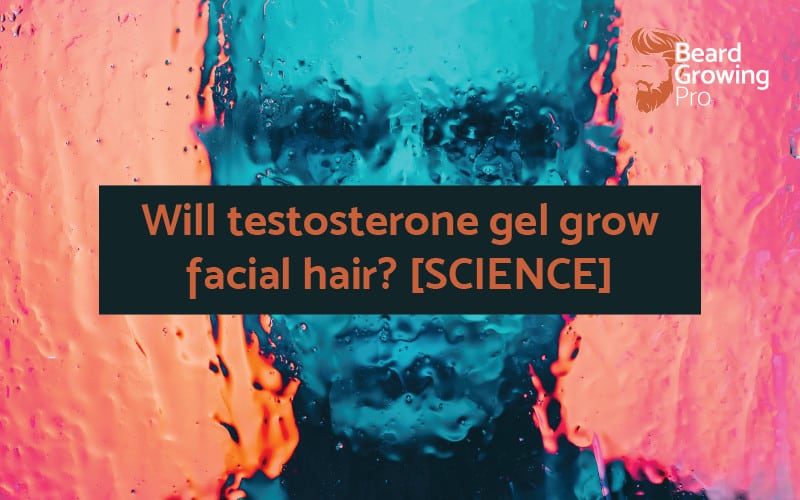 Testosterone gel has been shown in a 2007 study to increase the amount of beard growing in men suffering from hypogonadism. There have been no studies in healthy males to prove whether topical testosterone gel would have the same effect.

There are plenty of other topical treatments available to people wanting to enhance their beard growth using gels such as minoxidil and cover-up techniques using hair fibres.

In the table below, I summarise the results and options for people wanting to use a gel to enhance their beard growth.

The scientific study that looked at this question

In 2007 a study was published that looked at the treatment of young men with testosterone gel to grow their facial hair. It is important to note that these young men had beta‐thalassemia major, an inherited haematological disorder characterised by the early onset of anaemia which causes a lot of gene mutations.

Hypogonadism is the most frequent complication in patients with this disorder, is an important cause of delayed adolescence, and is often associated with low testosterone concentrations in the blood. The men in this study have an underlying biological issue, and the gel was used to enhance the amount of testosterone in their bodies. The gel used was a 2.5% concentration of testosterone.

This study looked at 32 men over the age of 15. The patients were divided into two randomised groups, and it was a double-blind and placebo-controlled study. These experimental details mean that it is a study that can be trusted.

Each patient received two tubes of gel and was asked to apply to centimetres of the jail each morning and evening to the beard area while mass urging it for two minutes.

A dermatologist measured the number of thick terminal hairs in a 1 cm chin area.

The results showed that terminal hairs were significantly higher in the testosterone gel group than in the control group. There was only one person from each group that complained of irritation.

The results can be seen in the graph below.

The ultimate take-home message from this study is that testosterone gel can help increase the amount of beard growth if you have an underlying biological reason for delayed or stunted growth.

Interestingly, there has been no direct follow-up derivative studies from this interesting finding. Maybe in the future, someone will do a further investigation and try to work out if this approach would help people with other conditions who are struggling to change their beard hairs from vellus to terminal hairs.

Let’s take a look at all of your options below.

Other topical therapies for growing your beard

Even though the science is not definitive on the use of testosterone gel for growing a beard, the preliminary results are quite exciting, and it’s only a matter of time before other people investigate this option for growing a beard.

Some other topical therapies in the literature have been proven to work, such as minoxidil, or have some very interesting preliminary observations that may help people grow a beard in the future.

One of the interesting and let explored options is the acne cream mentioned below.

In 2016 a letter was sent to the editor of a scientific journal that outlined an interesting effect of acne cream.

A 30-year-old male was using an acne cream to reduce the amount of acne on his cheeks and face. The acne cream was called Tretinoin.

It is a popular acne treatment and is used to manage acne scars and as a skin preparation for medical peals. There have been plenty of topical side effects, but not one identified properly.

The letter showed that one week before and acid appeal of his face, the patient was ordered to put 0.05% Tretinoin cream on his face daily. And it was continued after the chemical peel.

The patient reported a significant increase in beard density on his cheeks at the three-month follow-up.

He stated that he had never reached this level before, and there had been no significant change in his hormone profile.

You can see the results of this daily cream application in the figure below.

Despite seeing these excellent results, there have been no additional studies, and this is the first reported case of improvement of beard density following the daily application of this cream.

Before getting too excited, you must understand that this is observed only in one person. There needs to be a lot more research and possibly a split-face study to properly understand the mode of action of this cream and whether or not it works for different people.

The authors note that they are convinced that the cream itself is not sufficient to produce beard growth; otherwise, all acne patients would suffer from this side effect. However, given that certain individuals may have different reactions and combinations of treatments, the drug could promote hair thickness and increase the density in certain drug and treatment configurations.

In 2016 a letter was written to the editor of a scientific journal that talked about the efficacy and safety of a 3% minoxidil lotion for beard enhancement. The study was randomised, double mask, and placebo-controlled, which means that it was a rigorous study, and you can trust the results a lot.

The topical treatment of minoxidil was used over 16 weeks by 48 men aged between 20 and 60 years old. Patients were instructed to apply a 0.5 mL volume of topical solution on the chin and jaw twice daily.

Three doctors evaluated the photographs and noted the changes in hair counts and diameter from the baseline recorded before treatment.

The scientists concluded that minoxidil is an effective and safe treatment for beard enhancement when applied topically as a 3% lotion. Interestingly the hair diameter remained unchanged, but the count increased. This interesting result may be because the minoxidil promoted the growth of non-terminal hairs, and the measurement of the hair was done on both terminal and non-terminal hairs.

Nonetheless, beard growers have used minoxidil to enhance thickness and density since this study was released. There are many online communities where you can find out more about using minoxidil to increase the thickness of your beard.

Topical treatments can be combined, and it looks like the two studies of the acne cream, and the minoxidil may help when used together. This action is likely due to the increased permeability of the skin and helping improve drug absorption.

There are now many studies looking at combining lots of drug options for maximum absorption and effects to grow beard hairs.

Hair fibres can be used as a topical treatment to fill the gaps between the beard hairs. There are different pigmented powders, sprays, or hair fibres that can enhance the beard.

These topical hair fibre treatments are easily removed with shampoo, and these quick methods can be used by men that need a thick beard for special occasions or when they want their beard to look extra dense and thick.

Micropigmentation is the act of using a tattoo to cover up the visible skin between hairs. The tattoo approach must be used carefully and can easily result in infections or permanent scarring, and damage to the face.

Choosing a tattoo artist with experience in micro-pigmentation that can apply the tattoo evenly and more generously across the face is important for meeting the patient’s expectations.

Low-level laser therapy is also another treatment option, and most studies showed successful hair growth and improvement, but several studies have also found no significant improvement.

The combination of lasers and minoxidil has seen better results for hair growth compared to the use of topical minoxidil treatment on its own. It is not very cost-effective, and the lasers may not be easily accessible for many people who wish to grow a beard.

If you want to know more about proven ways for growing your beard check out my YouTube video below.

This article has been over whether or not testosterone gel will help grow facial hair. Some interesting preliminary studies in men with underlying biological conditions have yet to be extended to healthy males seeking further beard growth.

As time goes on, there are plenty of options for avid beard growers for enhancing their growth. Minoxidil, acne cream, laser therapy and topical cover-up treatments such as hair fibres are all important that physicians can use to help people reach their beard goals.

I am confident that more and more options will become available to people looking to grow a beard in the future, and science will slowly catch up with the creams that have already been identified. The scientific process is relatively slow, but progress continuously results in some outstanding landmark science.

Beard growth enhancement will rapidly advance because of this.