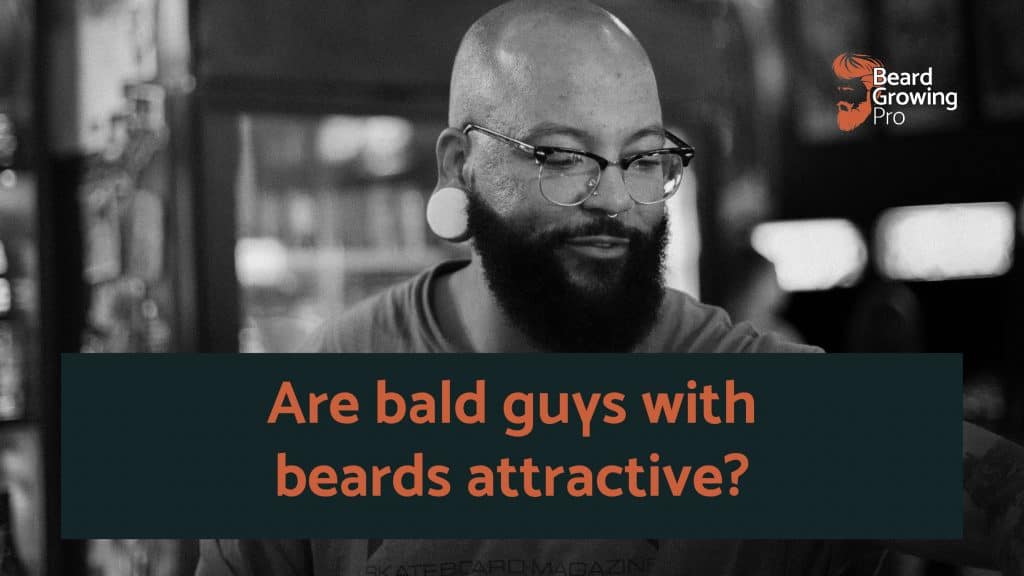 Going bald can be relatively confronting for any person. It starts to affect the way that society views you and reacts to you. More importantly, it may also impact how you view yourself in terms of your attractiveness. Genetics ultimately dictates whether or are going to go bald or not. It is very common for balding men to grow a beard. Maybe it’s a way to take back some form of control. After all, if you are losing your hair it often means that you can grow a phenomenal beard. But, are bald guys with beards attractive? Let’s take a look at what polls and individuals are saying online.

There’s plenty of evidence of the attractiveness of beards and bald heads on men. Even scientific studies. The science is pretty clear on it. Both beards and balding men are more attractive. But when you look at the polls the jury is still out.

There are so many more things that make a person attractive – your beard and/or bald head is only one of those things. So really OWN what you have and you will be attractive!

The definition of attractiveness

The word attractive can mean a number of different things to different people.

1. Pleasing to the senses or mind, as by being beautiful: plants with attractive flowers; an attractive painting.

2. Interesting because of the likelihood of being advantageous or profitable: an attractive business deal.

3. Having the power to attract: the attractive force of gravity.

The evidence for bald man attractiveness

Being bald has been said to be a sign of virility which is really only a good thing to be known for. But with beards, like vegemite, some people love them and others hate them. But what does the science say?

Research has found that physically attractive people are judged to be more musically competent and that they receive more favorable treatment by juries, are perceived as less deceptive, and are regarded as being more successful in general. So, clearly, you want to be on the attractive end of the spectrum.

Research published in Social Psychological and Personality Science suggests that there are some benefits to being bald. The researchers had men and women participants rate photos of bald men and men with a full head of hair on how dominant, agreeable, and old they might be.

The bald men were perceived to be about one year older, slightly more agreeable, and much more dominant. Not happy with the rigor of this experiment because the researchers were not sure if the men perceived more favorably looked that way independent of the baldness.

So they did another study…

In the second part of the study, the researchers had one group of participants rate photos of men with full heads of hair, and another group rated the same men, but this time the hair was removed with photoshop.

This study isolated the effect of the baldness on the perceived attractiveness of the people. This time, the bald men were rated as being:

The message from this study speaks loud and clear. If you are going bald, do so with confidence because really the perception of your baldness is overwhelmingly positive.

What bald men are saying online

Quite often you hear about the attractiveness of balding men from women. But what is the experience of balding men? This answer stood out to me as transformative – once they embraced the bald!

I realized I was losing it sophomore year of college. By senior year, most of it was on its way out.

Finally, at 25yo I decided to start shaving it. This changed EVERYTHING for me. It gave me confidence and made me feel younger. In fact, the first time I shaved it was a few days before my first date with my current wife. If I hadn’t made the decision to shave it, who knows what would have happened! I’m sure I would have been far less comfortable in her presence than I was.

It seems that all of the people on this forum noticed one thing. Their baldness had nothing to do with their ability to attract a mate. It was their confidence about going bald that made them attractive to a potential partner.

For more detailed information, check out the Nationwide survey results from Prim and Prep – Click here.

What women are saying about bald men

Although balding men may actually have noticed a change in themselves and seen positive results, what do women think of our baldness?

Here are a couple of perspectives from the online question and answer site, Quora. Firstly, How unattractive is balding to women? Quite a loaded question right?

Given the phrasing, I’d expect a pretty harsh response. However, that is not the case:

Given that you may be tempted to hide your baldness – the next question I explored was: Do women like men that try to hide baldness?

You may be making and even worse decision if you decide to try and cover it up!

Be proud, be you and own your hair loss. Bald guys are sexy and confident. people who don’t hide are gorgeous. In my opinion : Hiding is for children so hiding hair loss is immature and unsexy.

The evidence for beard attractiveness

Over the years, beards have come in and out of ‘fashion’ but there are always a number of men to which fashion does not matter.

The thing is, a load of people will always have an opinion on whether beards are attractive or not. There have been a number of polls and surveys over the years but they often contradict one another.

Here are a few polls where beards have been at the center of the discussion:

It seems to me that most people when polled say that they prefer clean-shaven men. However, when you look at the research it seems to be the opposite. I sit that we should believe a random poll or science? As a bearded man and scientist, I say I trust science!

In research published by the Journal of Evolutionary Biology titled “the masculinity paradox: facial masculinity and beardedness interact to determine women’s ratings of men’s facial attractiveness”, researchers asked 8,500 women to evaluate the attractiveness of men of three categories – bearded, fully bearded or sporting a goatee.

They used photos of men as they grew their beards. The results showed that men who were sporting full beards were seen as more mature, masculine, socially dominant and aggressive.

Beards were also a trait that women would consider when choosing a short or long term partner.

What about a bald and bearded combo?

I scoured the internet for evidence about the combo – both beard and baldness. Bu tI could not find any studies that looked at the interplay of both of these factors.

If you can assume that the results above can be combined there’s no reason why having both a beard and a bald head wouldn’t be seen as attractive.

The benefits of growing a beard with a bald head

When I was completely bald and did not have a beard I felt “testicular”. Like my head was a giant beige mass similar to a testicle. Even one of my friends said that my head lacked any contrasting elements.

But, in spite of not being able to find any good research on the topic. Here are the reasons that you should grow a beard if you are bald:

So, are bald guys with beards attractive?

As you have seen above, there’s plenty of evidence of the attractiveness of beards and bald heads on men. Even scientific studies.

The science is pretty clear on it: Both beards and balding men are more attractive.

But when you look at the polls the jury is still out. It seems that no matter what, you need to rock your look with style. There are so many more things that make a person attractive – your beard and/or bald head is only one of those things.

So really OWN what you have and you will be attractive!